Home > Commitment > One change that can bring your relationship back to life.

One change that can bring your relationship back to life. 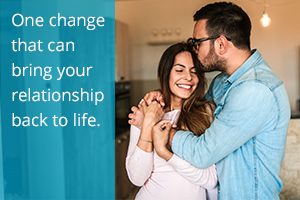 When I was seven years old, I found an abandoned kitten in the road. She was missing an eye. And she was so skinny I thought she might die soon.

So naturally, I did what any seven-year-old boy would do in this situation. I took her home.

My parents said I couldn’t keep her. I’m sure they gave a logical explanation, though I can’t remember it now. I just remember feeling sad.

I carried her around outside. She looked up at my face and meowed in an earnest sort of way. I was convinced she was actually trying to talk to me.

The neighbor kids saw me carrying her around and came to investigate. Fortunately, their parents allowed me to leave the kitten with them. She would be an outdoor cat but they would feed her and I was welcome to visit as often as I liked.

She was clearly the runt of the litter. Apparently, the runt is often rejected by the mother in order to preserve her limited resources for her stronger, more viable offspring. Runts are not always rejected, but it’s more common among feral cats, like the one I found.

I’ve always had a soft spot for runts. Maybe because I was a bit of a runt myself.

I was the shortest person in my family. As a freshman in high school, I kept expecting my growth spurt to kick in at any moment. But it never did.

I just kept growing very slowly. By the end of my freshman year, some of my friends looked more like men than boys. I felt small and scrawny next to them.

But that summer, my older brother got his driver’s license, and I began tagging along when he went to a university fitness center (a perk of my dad’s job). A college football coach saw me there and probably took pity on me the same way I took pity on the runt of the kitten litter. He began to mentor me on the basics of strength training.

He would yell at his giant football players for a few minutes, then step over to me for a few seconds, gently pointing out my errors or recommending a different method.

I think he was impressed by the effort I was putting in. Though I never told him my true motivation. His football players were cool and all, but I just wanted to look like my childhood hero, He-Man.

As luck would have it, my genetics seemed to be primed for muscular hypertrophy (getting big muscles in response to resistance exercise). Because by the time I entered my junior year of high school I was still only 150 pounds, but I could bench press 300 pounds, matching the strongest member of our high school’s varsity football team.

I began to get some positive attention from peers and coaches alike. And this gave me the courage to try out for several sports. Sadly, it was not meant to be.

The problems started during track practice, about three weeks in. Repeated hundred meter sprints unearthed a critical mistake I had made during my resistance training.

I had completely neglected my core.

My back spasmed into a knot of pain. It was painful to stand up. Painful to lie down. Painful to sit at my desk in school.

I took so many anti-inflammatory meds during the following three weeks that I ended up peeing blood.

That led to a series of doctor visits, where it became clear that my muscular structure was out of whack. I had failed to develop the most important muscles for health, posture, and functional fitness.

Once again, I felt like the runt among my classmates. A pitied wannabe walking through the hall with very short steps to avoid throwing my back into another painful spasm as it slowly healed.

It took several years before I discovered the solution to back pain. Now I recommend it to everyone. Because years of low back pain, upper back pain, and neck spasms taught me how miserable back pain can be.

Sometimes I could barely turn my head for weeks after a sneeze or some other simple motion revealed the lack of flexibility and balance in my body.

No more. I’ve learned why the place where you feel the pain is rarely the place that needs your attention to fix the problem. And no one explains this concept (or exactly what to do about it) better than Emily Larkin.

You see, the lesson I learned is to build your foundation first.

Don’t go for the showy stuff that looks like progress while neglecting the foundation that will really make you succeed.

But when I finished my list, I realized one item on the list was more important than all the rest combined.

So today, I want to talk about that. One principle for a relationship built on a special kind of foundation. A foundation that will bring  you and your partner a lifetime of happiness.

Here’s the one principle that trumped all the rest on my list:

Invest in each other’s happiness instead of trying to work on the relationship directly.

If any of you have taken my relationship course, “Endless Honeymoon,” you understand that this one principle has many powerful implications. But the concept can be summed up as follows.

Instead, you were gleefully focused on your partner’s happiness. Because it’s your natural focus when you love someone deeply.

The problem is, most relationships grow stale.

If we spend enough time together, our natural human tendency is to start looking out for our own needs, seeing the relationship as some separate entity that needs our work and attention. It can even become an energy drain. This is often when couples begin to question why they are together in the first place.

Sometimes a relationship needs some work. But more often than not, refocusing on the core strength of your relationship will fix all those other issues as if by magic.

The key for this to really work is that both partners should make a conscious decision together to invest in each other’s happiness as the highest priority in the relationship. Because when both people try to outdo each other, it unlocks the magic of true love all over again.

Now, I understand not all relationships are perfectly positioned for an open conversation about something like this. I realize you may not be able to ask your man to join you in a three-month experiment where you focus your interactions on unlocking each other’s happiness on purpose.

But what if you took just a piece of this idea and let it influence your relationship today? What if you made this idea your own and looked for ways to adapt it for your own needs and purposes?

It’s to that worthy endeavor I’ll leave you now with my best wishes for a lifetime of love.

Don’t let happiness become the runt in your relationship. Don’t let it get neglected while you pursue less important details in your daily interactions.