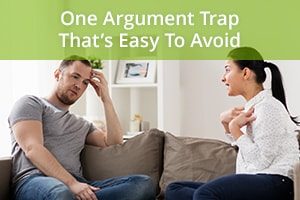 Your brain is programmed to have a very specific reaction to fear. That reaction can save your life. But it can also wreck your relationships.

Let’s take a quick trip back in time.

Imagine you lived thousands of years ago, long before the world was civilized. Life was considerably more perilous. In order to survive, you had to be ready for danger literally all the time.

These days, a saber-toothed tiger isn’t going to make a snack pack of you on the way to work. That’s not how the modern world works. And yet, the primitive fear reaction that allowed your ancestors to pass down their genetic code to you is still active in your brain.

Which is often inconvenient. Like, for example, when there’s an argument with someone you care about.

Conflict has a way of triggering FEAR. And while romance is (hopefully) mostly carefree, there are definitely moments when intimacy can be scary.

When those moments pop up, a specific part of your brain goes into overdrive: the amygdala. The amygdala is responsible for several things, but it serves as an instant on-switch for fear.[1]

When we feel afraid, the amygdala kicks into high-gear.  That elicits a response that psychologists refer to as “fight, flight or freeze.”[2]

When the amygdala goes into action, high-level reasoning SHUTS DOWN. This is known as an “amygdala hijack.”[3] The results make for horrible communication.

An amygdala hijack completely destroys any chance of productive dialogue. Some people fight harder. Some people just shut down. Some even physically run away, leaving the room and refusing to re-engage.

No one is immune to this, no matter how level-headed they are otherwise. The worst communication mistake you can make is to try to communicate while either of you are in the middle of an amygdala hijack.

Amygdala hijacks are going to happen, but they don’t have to wreck your relationship. There’s a simple, three-step plan you can use to handle them well. And the beautiful part is, it works every single time.

The single hardest thing about avoiding amygdala hijacks is recognizing them.

Think about it. When you’re in the middle of one, your high-level reasoning has clocked out. Self-analysis isn’t at its peak. So recognizing you’re in a fight-flight-or-freeze frame of mind is TOUGH.

The best way to avoid getting hijacked is to plan ahead. Granted, you can’t possibly know when a moment of tension will ambush your relationship. But you can cultivate a critical habit.

Whenever a fight first begins, move immediately to step two.

2. Take a break to organize your thoughts.

Don’t give him a piece of your mind. Don’t emotionally shut down. As calmly as you can, tell him you need a few minutes to sort out what you’re feeling.

This gives both of you a chance to let your brains shift away from amygdala hijack. When the immediate sense of danger (a potential fight) is off the table, you’ll see the conflict differently.

Take advantage of that clarity to prep for a more productive conversation. It can be really helpful to write down your feelings, especially any fear you feel. Acknowledge your fears and accept them.

That empowers you to revisit the issue without triggering another amygdala hijack.

Finally, revisit the issue after your prep work, when you’re both calmer.

That might be 2 minutes later, 20 minutes later, or it could be the next day. Just make it a point to plan for a conversation soon. Don’t let conflict go unattended. Or else it just festers.

After all, the goal isn’t just to avoid bad fights. The goal is to build the best possible communication.

Our brains are wired to protect us when we feel threatened. That’s why we go into fight-flight-or-freeze mode. Unfortunately, those responses don’t enrich conversations with your man.

Before things escalate, resolve to take a quick break if the conversation turns tense. When you’ve both had at least a few minutes to re-center, you’ll be in a much better place to facilitate good conversation.