Home > Attraction > Not Your Reality 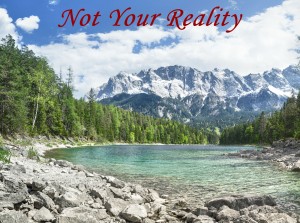 “You find yourself arguing and having issues at your house and in your marriage and in your family that are directly influenced from the sh*t that you’re seeing on TV. You don’t even know it.”

Granted, Tyrese may not be the ideal relationship coach, but he actually makes a good point. Reality TV should not be your reality. You need to focus on something more positive.

Reality TV is nothing if not negative. After all, the ‘human drama’ of reality TV tends to zero in on those times when things go poorly. Epic fights and door-slamming arguments crank up the ratings. Sadly, it seems watching others mismanage their relationships is what keeps us tuned in.

Gibson argues that the cumulative effect of all that negativity is that it seeps into our lives. Before long, all that bad juju starts to impact how you think about your man. You can’t feed on a diet of cynicism and expect to stay positive! Eventually, it’ll get to you.

And it’s not just reality TV. There’s negative stuff about relationships in just about every form of media.

This is why you really need to remove some of that negativity from your life and replace it with something more uplifting.

I know it sounds like something from an after school special, but the truth is that the more you expose yourself to negativity, the more negative you’ll become. Thankfully, the inverse is also true. If you want to be a more positive person, immerse yourself in positive things.

No one’s asking you to be giddy all the time. That’s just not possible. However, there’s a lot of wisdom in taking stock of the things you expose yourself to. Do you spend hours watching reality TV each week? Reading celebrity gossip? Eating up online articles that trash one famous person after another?

You don’t have to stop. But as your relationship coach it’s my job to point out how you might be better off without that stuff in your life.

Instead, find ways to feed yourself a steady diet of more positive stuff. You might not even have to look far. Something as simple as asking your guy if anything good happened today could do the trick. Or spend a few moments thinking about your own day and find a few things to be thankful for. The practice of intentionally rerouting your thoughts toward upbeat things will have a huge impact on you. And on your relationships.

Tyrese put it this way: “We should highlight love and beauty and things that are working versus just being so focused on the things that aren’t working.”

Make it a point to focus on the positive, especially in the next few days. It won’t take long for you to feel the effects. You, and your man, will be happier for it.