Nine Ways to Woo Your Man 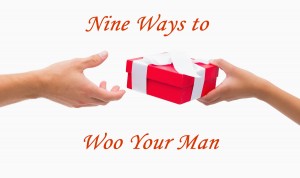 Everyone likes small, unexpected gifts. But if you want to surprise your man with something pleasant, flowers and chocolates aren’t the way to go.

Instead, you need to think outside the box. Below you’ll find a list of 9 simple things you can do to delight the guy in your life. Every one of them is quick and inexpensive, but the payoff in your relationship can be huge.

Guys are visual creatures. When you take the time to dress in something he likes, it shows that you’re thinking about him and you want him to be thinking about you, too.

2. Little reminders. A note before work. A call during the day, just to tell him you’re looking forward to seeing him later. Anything short and sweet that lets him know he’s on your mind.

The key here is to keep it simple. You don’t have to write a sonnet. A sentence or two is enough. If you really want to go all out, bonus points for racy pictures sent discreetly in the middle of a stressful day.

3. Make connections with his connections. Is your man really close to someone in his family? Like, for example, his mom? Try taking that person out to lunch and just be your charming self. Showing him you care about the other people in his life lets him know how much he means to you.

4. Mix it up. His drink, that is. Whatever his poison, be it coffee, tea or a classic martini, learn how to make his drink just the way he likes it. Perfecting his preferred libation shows how attentive you are to his needs.

5. Make a list. Any time he mentions something he’s excited to check out, make a note of it. This includes movies he wants to see, games he wants for his Xbox, or anything else.

It doesn’t have to be big. We’re not talking about the Porsche he’s always dreamed of. Tickets to a movie (that you are not particularly interested in) will work just fine. Paying attention to what he’s into goes a long way. Plus, you’ll look like a gift-giving mind reader, and what guy isn’t into that?

When was the last time you randomly walked up to your man and planted a long passionate kiss square on his lips? This works great when you’re parting ways in the morning. It’ll give him something to think about all day until he gets home to you.

And speaking of keeping him thinking about you…

7. Send him a sensual text message. Just a quick sentence or two implying that you’re looking forward to a romp in the bedroom when he gets home is more than enough to spark his appreciation of the intimacy you share as a couple.

8. Heat his towel in the drier. I’m talking about something simple and unexpected. While he’s in the shower, warm a second towel in the dryer. When he’s almost done, quietly replace the one he had ready. He’ll have a warm, fluffy towel waiting for him.

9. Bake something. Anything. Like you’ve heard your whole life, the way to a man’s heart is through his stomach. Men love food, and they love the people who feed them. If there’s something specific his mom or grandmother made that he really enjoys, a quick phone call is likely all it will take to track down the recipe.

There you have it–nine things you can do that are sure to win his attention.

As you use these tips, keep in mind that little things can have a profound effect. You don’t have to do anything elaborate to let him know you care. Just be attentive and invested in him and the things he likes.

That’s really all it takes to woo your man.