Home > Heartache > My Husband Keeps Letting Me Down

My Husband Keeps Letting Me Down 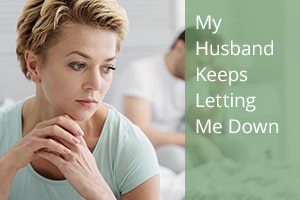 Skye knew she’d found the One…

Until they moved in together.

This awesome boyfriend who made her laugh and fixed her scrambled eggs and took her mud car racing morphed into someone she didn’t recognize once they were married.

He was terrible at making her feel better when she had a stressful day at work.

He didn’t even ask her if she wanted anything when he made himself something to eat.

He hogged the sofa and the bed. She had to ask him to make space for her.

There’s always a transition period when it comes to living with someone new. Skye knew that.

But what she didn’t like was the way her husband responded when she asked him to do things differently.

He acted like SHE was the one with the problem.

He’d either agree to make an effort—and then “forget”—or he’d get defensive and bring up all the things she did that annoyed him.

She couldn’t get anywhere with him…

And it was destroying their relationship.

She wished they’d never decided to move in together. She liked things the way they used to be. When they just had fun together, it worked. When they had to rely on each other, it didn’t.

Was there hope for Skye’s relationship?

There are two common pieces of advice for situations like this:

Neither of those recommendations is very helpful.

Either Skye has to accept the way things are, or she should end the relationship.

But what about making things better?

To make things better, we’ve got to heal the root of the problem. We have to realize that what’s going on, on the surface, isn’t the underlying issue.

Skye thinks the problem is her husband’s inconsiderate behavior. He’s ignoring her needs.

Her husband has the opposite perspective. He just wants to come home and chill out, and Skye won’t let him. She makes all sorts of demands on him.

When a couple makes it official or moves in together, she hopes that the relationship shift to a deeper level. He’ll step up as her partner. They’ll become even closer.

Meanwhile, he hopes that nothing will change. He enjoys being with her. He wants things to continue being fun and pleasurable.

Both end up disappointed.

It doesn’t have to be that way.

He Hates Letting You Down

A lot of men avoid commitment or going to that next level in a relationship because they’ve convinced themselves they’ll let her down.

In the past, they’ve gotten into relationships where their girlfriend expected more of them than they could give. Instead of continuing to disappoint her, they just pulled away.

There is nothing worse for a man than letting down someone he cares about.

Men thrive on success and winning. They want to be the best. From childhood, they’ve spent their lives hustling for respect and admiration.

So when a man lets a woman get close … and she starts communicating in a way that suggests he’s not measuring up … it hits him like a ton of bricks.

Meanwhile, she thinks she’s the only one making an effort to resolve their differences. When he shuts down, it’s like he doesn’t care.

How can they find their way back to closeness again?

Find Opportunities in the Obstacles

When you feel disappointed in your husband, he senses it on some level.

You don’t have to say anything—he knows.

That’s why the first step in healing a relationship is to notice the wins.

Chances are, there are a lot of things going right in your relationship. Pay attention to those moments of connection and happiness. Draw attention to them. Sit with them. Let yourself be filled up by the pleasure of being with this man you’ve chosen.

Noticing the wins can make an immediate shift in the energy between you.

But how do you resolve your conflicts?

Start by seeing every conflict as an opportunity for better understanding. What if this conflict wasn’t about what you think it’s about? What if it’s about how you feel about what’s happening?

For example, Skye hates her husband hogging the sofa. Is this really about him not scooting over? Or is it about how she feels when there’s no room for her?

Things bother us when we feel rejected on some level. Often, our most challenging conflicts are around topics that make us both feel rejected by each other.

For Skye, the answer wasn’t training her husband to be a better roommate. It was being sensitive to the underlying feelings of rejection they both felt.

As she explained, “You can love someone but not know HOW to love them.” Once they stopped shaming and started sharing, those pesky conflicts lost their punch. It really was all about feeling appreciated and loved.