Most People Make At Least One of These 6 Relationship Mistakes 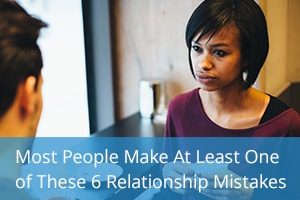 Have you ever noticed that your romantic challenges seem to be the same, even when you’re with different guys? Would you like to know why?

You’ve probably seen the movie How to Lose a Guy in 10 Days. In it, Kate Hudson’s character accepts a weird bet. She wagers she can drive a guy away within 10 days just by committing common relationship mistakes.

She’s possessive and clingy. She picks a fight in a movie theater and then pushes the guy to defend her. She moves things into his apartment . . . within days of meeting him. If there’s a behavior that’s likely to make a guy want to scream and run, she embraces it.

And it’s funny because everyone knows not to do that stuff.

But what about the things that don’t sound like such a bad idea—things you’ve even been advised to do. Things that have become habits.

Some of them really mess with romance, too.

And you’re not like Kate’s character in that movie. You’re not trying to drive a guy away. You’re shooting for real intimacy.

You’re absolutely not sabotaging your dating life on purpose. Everything you do you do for a reason. And yet…

Most people have at least one of the following 6 habits that make relationships harder to succeed with.

Let him know you’re interested. Even make the first move if you’re comfortable. If he’s into you, he’ll find ways to let you know you’re attractive to him.

If not, move on. Life’s too short.

Most likely, something that doesn’t mesh with your core values. For example, you may find bad boys attractive, while at the same time valuing stability and reliability.

Dating the rebel guy with a motorcycle, no job and a devil-may-care attitude might sound hot, but it’s not likely to work out in favor of your happiness.

What you should do instead:

Dig deep and identify your core values. Then think about the kinds of characteristics a guy would need to have if he’s likely to share those values.

Reorient your dating efforts around landing that kind of guy.

3. Clinging to your cell phone.

A sense of security. It feels nice to see all those notifications rolling in. It may even be addictive!

But as an article in Psychology Today points out, “ . . . the mere presence of a phone will disrupt relationship development—even when the phone isn’t being used.”

Turn off your notifications. Resist the urge to scroll through Instagram while you’re with him.

Ditch the phone and lean into time with your guy.

4. Expecting him to be psychic.

Assurance that he’s tuned into your needs. That’s why you’ve heard some women say, “He should just know what I’m feeling.”

But no one is a mind-reader, and guys (all people, really) are notoriously bad at guessing what others really want. Don’t expect him to do a good job of reading between the lines.

Pay attention to how he reacts when you tell him what you want or need. That’s the real test.

If you say you like flowers and he greets you with roses for your next date, he’s tuned in. It’s as simple as that. (And if not, try telling him specifically why you feel good when a man brings you flowers.)

Fights make us feel like the foundation of the relationship is shaky. But conflict is also a legitimate part of healthy relationships. There is literally no (healthy) couple in the world that never fights.

Communicate honestly. If it causes the occasional fight, focus on how you can make the conflict productive.

That means “being right” doesn’t matter. Growing closer and understanding each other feels much better than proving the other party was wrong.

Recognition for what you do right. Proof that fights are not your fault.

When a fight starts, it’s tempting to rattle off the last 17 stupid things he did. It feels like that gives you an edge in the current conflict. But what it really does is erode trust.

Deal with each issue on its own.

Don’t dredge up the past, even if it seems somewhat relevant. Instead, fully explore the current issue and nothing else. Moments of conflict are much more likely to result in deeper trust if you do that.

A final word. If you see yourself in some (or even all) of these habits, do NOT beat yourself up over it. I’ve made every one of these mistakes myself, at some point. Most people have.

The goal isn’t to tally up your personal fails. The goal is to be the best possible version of you—and to do that in a way that creates intimacy and connection.

Scrap the bad habits and replace them with something more constructive . . . without the guilt trip. That’s how you land the relationship of your dreams.