Men Who Placate to Avoid Disagreements 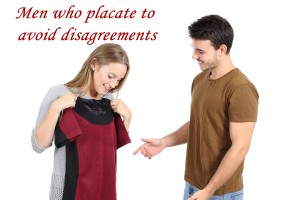 She steps out of the fitting room, still fidgeting with the dress. He can see the question on her face before she says anything.

They’ve been at it for more than an hour, trying to find the perfect dress for the party. He’s having a hard time telling one from another. And, honestly, he thinks this one looks as good as the last three. He tells her so.

“Looks great,” he says without hesitation.

She turns away from him and looks herself over in the full-length mirror.

He sighs, and the shopping expedition continues.

The above scenario is a common one. So much so that researchers from the University of Arizona used this very example to describe their findings in a recent article. “…men cooperate to avoid conflict,” the article states. “Women, meanwhile, tend to serve as ‘emotional regulators’ during cooperation and try to get at the root of a problem rather than brush it off.”

In other words, he’s agreeing so they can both move on. He’s really saying, “This dress will work just fine—now, let’s go do something else.” But she’d rather make sure she’s found the best possible solution. She’s saying, “I’m not completely satisfied. Let’s explore this further.”

Is any of this familiar?

In fairness, both strategies sound good in theory. After all, men and women ultimately want the same thing—resolution. They just have different preferred methods for achieving it.

Men (on average) tend to voice agreement more quickly during moments of disagreement. By telling you you’re right, your guy is using a cooperative technique that would work surprisingly well with other men. There can’t be a fight if both people are on the same page!

But in relationships, you sometimes need to get to the bottom of things. What if your man is voicing agreement, but he doesn’t really mean it?

To a man, saying he agrees even if he doesn’t feel it in his heart is a sacrifice. He’s wired to stand his ground. By giving in, he most likely thinks he’s giving a gift. He’s foregoing his ego and telling you what he sincerely believes you want to hear.

There’s just one problem with that. You can likely tell when he really agrees and when he’s just saying he does.

For that reason, most women push past a guy’s initial attempt to end an argument by simply agreeing. Women are interested in digging deeper to explore what may have caused the disconnection to begin with. That’s because women are often more concerned with the subtle emotions involved. If those emotions are addressed, maybe the same kind of conflict can be avoided all together in the future.

Both parties have their hearts in the right place. Both want resolution. However, these two dramatically different strategies collide. How do you get your man to talk to you about what’s going on beneath the surface without making him feel like you don’t appreciate his efforts?

Here’s what I suggest. When you recognize a disagreement and he seems over-eager to concede, make it a point to tell him you value his perspective even if it differs from yours. Tell him you’re primarily interested in open communication. Let him know you’re okay even if it turns out that the only solution is agreeing to disagree.

If you act frustrated because he seems to be pulling back, he’s just going to pull back more. He’s already taking a hit to his ego by offering to surrender. You don’t want to accidentally kick him while he’s down. That will almost certainly distract both of you from the core issue. It might even start a whole new fight!

Instead, build him up.

Remind him that disagreements are healthy and normal. Tell him you respect his opinions and you want to hear them, even if they differ from your own. This approach builds intimacy. It decreases the chance that the two of you will drift apart over small issues that could’ve been easily resolved if you had discussed them openly.

The key here is to affirm both his attempt to resolve the issue and his opinion. Once you create a foundation of mutual respect, you’ll both feel more comfortable discussing the core issue instead of just putting a band-aide on it.