What Men Need More than Pep Talks When Feeling Stressed 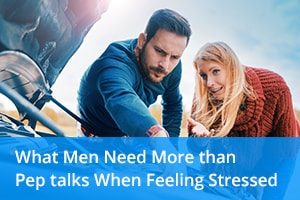 Many of the women I know can give a motivational speech better than any keynote speaker.

If you’re having a tough time, these women are the ones you want by your side.

They’re supportive, encouraging, and positive. When they see that someone is feeling down, they make it their job to bring that person back up again.

I think that’s wonderful. I value having people like that in my life.

But I’m also aware that their supportive nature can backfire on them … particularly in romantic relationships.

In a minute, I’ll share with you an extremely effective way to help the man in your life when he’s going through a tough time.

But first, let’s look at why men and women respond to support so differently.

We live in a world where everyone is supposed to be happy and having fun all the time. Social media captures the highlights of people’s lives.  Which makes us feel bad when we compare our lives to their seemingly exciting lives, full of funny and interesting posts.

Things do get hard at times. But, because it’s not necessarily socially appropriate to share those things, most people don’t advertise what they’re going through.

As a woman, you want to know what your friends are going through so you can be there for them. You don’t want them to hide it from you. It would feel as if they’re shutting you out.

But, if your friend is a man, think twice.

Men and women have very different ways of dealing with stress.

Researchers have found that men are more likely to fight or flee. This can mean getting argumentative with you just because things are going bad at work, or withdrawing to his man cave and communicating only with grunts.

Women are more likely to tend and befriend. Talking it through and engaging in healthy self-care activities (yes, shopping counts) can get a woman through most things.

The stage is set for trouble when a woman assumes that “tend and befriend” is the best stress-management strategy for everyone, including her man.

She knows something is wrong, but he won’t talk to her. He keeps finding excuses to avoid spending time with her.

When she reaches out to help, only to be met by a wall of male resistance, she feels hurt. And then she starts getting mad.

Who does he think he is? Why get into a relationship in the first place if you’re not going to talk to each other? She knows he’s withholding something, and that’s not okay. Honesty is the foundation of a good relationship.

He’s thinking that he’s a failure. Okay, maybe not a failure yet, but he’s on the verge of failing. And that cannot happen. Men don’t accept their own failures well.

From boyhood, he’s fought hard to be the best. He doesn’t mind a challenge, if there’s a good chance he’ll win. But what he’s going through right now is something else entirely. It’s making him doubt himself.

He can’t let the woman he loves see those doubts. Her belief in him is the only thing keeping him going. Complaining is out of the question, anyway. Men don’t whine. They grit their teeth and forge on.

Now, what happens when the woman he loves confronts him?

She demands to know why he’s not talking to her. He must not love her, because surely loving couples share everything. He’s got to tell her what’s going on.

Even worse, the stress he’s under has put him in fight-or-flight mode. His instincts are telling him to fight or walk away.

Let’s see if we can find a better way for our couple to connect.

She sees that something is going on for him, but he won’t talk about it. She thinks for a bit.

Then, in a quiet moment, she asks him if he’ll help her with something. The faucet is leaking, or her car is making a funny sound. It’s a job for a man with his skills.

When he’s figured it out and fixed it, she thanks him from the bottom of her heart. “I knew I could rely on you,” she says.

He holds her close. He feels better, and he has no idea why.

Give your man something he can win at. It works better than all the pep talks in the world.