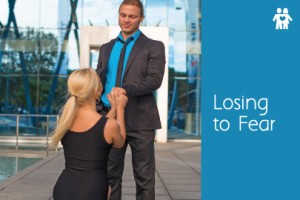 Should you gamble on your relationship?

Psychologists Daniel Kahneman and Amos Tversky discovered something fascinating about how we deal with risk.

A professor at Princeton, Kahneman is known for offering students in his class a simple gamble: a coin toss. If it lands on tails, the student loses $10. He then asks how much the student would have to win if it lands on heads for the gamble to be worth the risk.

Consistently, students want a minimum of $20 for a win before they’ll take him on. In other words, they want twice as much reward before they are willing to risk a potential loss.

Most of us are like that. We’re so committed to avoiding a loss that we’ll say “no thank you” to potential gains unless the odds are stacked overwhelmingly in our favor. The technical name for this is “aversion to loss.” Economists and psychologists alike use this theory to explain a lot of the choices we make.

When it makes its way into your relationship, this same dynamic can hold you back. Here’s how.

Relationships are, by their very nature, risky. Every time we open ourselves up to someone we’re walking out on a limb. There’s always a chance the other person will reject us. For guys, this often means they won’t ask a girl out until they’re nearly certain she’s going to say yes. They’d rather miss out on possible dates than roll the dice.

But even once a relationship is underway, aversion to a loss still guides us.

Think about all the times you want to communicate something to your man. Something about how you feel, what you want, or where you hope things are going. Do you speak up? Or do you avoid possible loss, missing out on all kinds of good things at the same time?

Especially in a relationship, rejection hurts. Telling him about your needs, dreams and desires only to be shot down, can be devastating. But he will never succeed in meeting your needs he doesn’t even know you have.

So, here’s what I suggest. When you find yourself in a place where you need to communicate something that’s going to leave you vulnerable, don’t just stuff it down. Instead, do what you can to stack the odds in your favor.

Here are some tips for stacking the odds in your favor.

Before you ask for what you want, do a quick check by putting yourself in his shoes. Have you been demonstrating an interest in meeting his needs, both big and small? That could be everything from making him feel trusted and respected, to something as simple as looking your best when you know you’re going to see him.

Second, wait for the right moment. We tend to bring up our frustrations during moments of conflict. It’s better to wait until things have been going smoothly for a day or two. Talk to him about needs and desires when all is peaceful and neither of you is feeling threatened or stressed.

Finally, be tactful. Seems obvious, I know, but it’s surprisingly easy to describe your needs in a way that sounds accusatory. Steer clear of saying things like, “You never…” Instead, tell him what’s important to you without accusing or obligating him. For example, “I’d really like it if we could…” Then you’re dreaming with him, not critiquing him.

As Brene Brown said, “Vulnerability is the birthplace of connection and the path to the feeling of worthiness. If it doesn’t feel vulnerable, the sharing is probably not constructive.” In other words, present your needs and desires softly, from a place of vulnerability, not from a position of powerful accusation or a moral high ground.

You really can walk out on the limb and share with your man, even the stuff that makes you feel vulnerable. The payoff in your connection to him can be huge. And if you follow the above tips, you greatly increase the chances that he’ll be receptive.