Home > Commitment > Life on the Sidelines—Women, Men, and Spectator Sports

Life on the Sidelines—Women, Men, and Spectator Sports 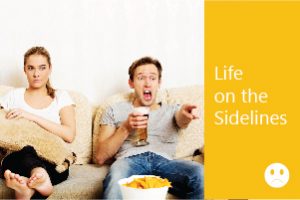 If you’re a woman who loves watching sports, consider yourself lucky. If not, you’re in the majority and probably already know what it feels like to be on the sidelines.

It’s the six-month anniversary of your first date with a terrific guy. You’re looking forward to a romantic evening out…or at least you were.

Since you don’t follow professional sports, you have no idea that your six-month anniversary happens to be falling in the middle of the [insert the name of any sports league here] finals.

On your anniversary, Team X will be facing off with Team Y. Who cares? Think again.

The terrific guy you’ve been dating for the past six months grew up in Team Y’s hometown and has been following the team since kindergarten. To put it mildly, he’s a huge fan. But when he gets together with the guys to watch the game, it’s about more than sports.

Okay, you’re skeptical. Sports are sports whether you’re talking about football or hockey, right? Not quite.

Dr. Wann has found that sports fans use religious language to talk about their favorite teams. Fans say they are “devoted” to their team and “worship” the players. Sometimes they even compare arenas and stadiums to cathedrals!

What does this mean? When the terrific guy you are dating gets together with his friends to drink beer, watch the game, yell land wave his fists in the air, he’s engaging in a meaningful ritual.

But does this mean you should just put up with being brushed off?

Not exactly. If you’re hurt or annoyed, tell him. But don’t count on this changing the situation. So what are your options?

First, there is the option of joining him. This may sound crazy but today, an estimated 35% of sports fans are women. For some couples, watching the game is a shared activity to which they look forward.

On the opposite end of the spectrum, you can simply let him be.

Of course, to avoid future conflicts, be honest. If missing an anniversary date for a game is a problem, let him know.  Come up with ground rules, and respect each other’s needs and limits.

The final option is a compromise. He gets his sports, and you get to indulge in whatever activity you love and can’t live without.

During the first six months of any relationship, the focus is often on similarities rather than differences. This is especially true when everything appears to be clicking.

In reality, differences are inevitable and even healthy.

Still feeling left on the sidelines? Don’t! His passion for sports is not about you—it’s about him. In other words, rest assured, you’re still in the game.