How To Be Less Self-Conscious 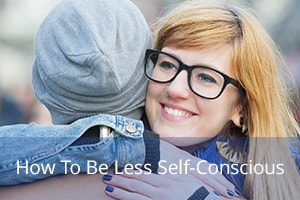 Sophie plopped herself down in a chair. “I did it again,” she announced.

“Sabotaged myself. Completely wrecked a promising encounter with a cute guy.”

I waited for her to say more. I noticed how small she seemed with shoulders slumped…as if she was shrinking away from life. Her dazzling smile hidden behind the clouds.

Sophie was fun, smart, attractive, the whole package. But she didn’t always present her best self, to put it mildly.

Sophie continued, “He was asking for my neighbor. He must have got the house number wrong. I told him where to go, and he took a step back. Then he paused! He looked around and told me what a beautiful house I had. I was like, yes! Clearly he was looking for a reason to keep talking to me.”

“Wrong. Because I started to get panicky. I realized I was wearing my worst sweatshirt, I hadn’t done my makeup, and my face was all shiny. If Prince Charming drops on your doorstep, you want to look your best.”

“So what?” I said. “He’d already seen you. What he saw must have made a favorable enough impression.”

Sophie sighed. “That’s the kind of thing I knew you’d say.  And it’s the kind of thing I only think of after the fact. Long story short, I started to panic. I have no idea what I said to him, only that I was probably babbling like some crazy woman. He left, and I was actually grateful. I was so embarrassed.”

Most of us have had an experience or two like that, when we really wanted to impress someone but started to panic instead.

But for Sophie, self-consciousness wasn’t an occasional thing. It was a habit. Every time she felt any hint of attraction, she immediately went into self-judgment. She could feel her brain freeze. Instead of enjoying herself, all she could think of was how she must be coming across.

Common wisdom tells us to deal with self-consciousness by reminding ourselves that people pay half as much attention to us as we think. The only person tracking our every move is us.

Sounds great, but self-consciousness is remarkably impervious to logic. Sophie knew she shouldn’t be so self-conscious, but she couldn’t reason herself out of an instinctive reaction.

How could she break this self-sabotaging habit?

Here’s what I suggested:

Bludgeon that bad habit with a sledgehammer. Break it deliberately and consistently, over and over again.

I set Sophie a task. I asked her to strike up a conversation with 5 new men a week. They didn’t have to be romantic prospects, just men she didn’t know. She could do it all on the same day or one a day, whatever she preferred.

But that wasn’t the hardest part.

I asked her to do it when she was looking her absolute worst. No makeup, grungy clothes, whatever would normally kill her self-confidence.

Sophie was aghast. “I can’t do that!” she told me. She felt she needed her “armor” in place before she could feel confident with a guy.

And that was the problem.

The more you need everything to be perfect before you can let go and enjoy being with someone, the more you’ll reinforce that self-conscious habit.

You’re training yourself to believe that a man would only be interested in you if you’re at your absolute best.

That’s not true. Men fall in love with you, not your performance.

That’s why I wanted Sophie to see that she could have successful interactions with men even if she wasn’t looking her best. Her appearance mattered a lot less than she realized.

Once you understand that attraction doesn’t require advance preparation, you can attract men anytime, anywhere. You know that what they’re attracted to is your natural way of being in this world, not the words you speak or the clothes you’re wearing.

If you struggle with self-consciousness, take Sophie’s challenge.

Go to the grocery store in your rattiest sweatpants and t-shirt, and say something to the guy waiting next to you in the checkout line. Run out to get a coffee straight after a sweaty workout, and have a chat with the barista. Prove to yourself that the world doesn’t stop just because you haven’t tamed your hair or put on a perfect show.

You are enough. Just as you are.