Home > Dating > Is He Interested? You Probably Wouldn’t Know… But You Can

Is He Interested? You Probably Wouldn’t Know… But You Can 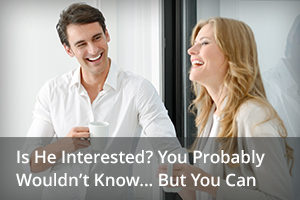 Can you tell when a guy is flirting with you?

According to researchers, the answer is probably no. In a study published in 2014, only 36% of men could tell. And only 18% of women could tell.

That’s right. Out of five women, only one is likely to notice when a guy is flirting with her. The other four? Clueless.

Obviously, it doesn’t work exactly that way. Sometimes a person can tell and sometimes she can’t.  But you get what I’m saying.

I’m going to help improve your batting average. And I’m going to do it by sharing a surprisingly accurate formula from a different research study.

But before I do, let’s examine why we’re so bad at detecting flirting.

Take a look at this conversation between two coworkers:

MAN: Not too bad, not too bad. My triathlon was Sunday, so I’m still pretty sore.

WOMAN: Um, I’d say. It’s certainly not something I could ever do.

MAN: Sure you could. You’ve already got a nice build. Just takes training.

WOMAN: (laughing) A lot of training, for me.

MAN: (laughing) A lot for anyone.

WOMAN: It does sound fun, though.

MAN: Well, you know, if you’re serious about trying, I’m available. I mean, you know, I’d be happy to help train with you.

WOMAN: Thanks. I’ll keep it in mind. See you.

Here’s what we know from what is actually said:

Mike could be flirting. He could be trying to find a way to spend more time with Cheryl. Because he likes her.

But there are alternative ways to see this, too.

Maybe he’s really into fitness. And he likes getting other people into fitness. Or wants someone to train with. Or perhaps he’s just a friendly guy.

From this conversation, it’s impossible to tell for sure.

Now, obviously in a real-life conversation, there would be other cues. Body language. Voice inflection.

Those things can help indicate interest.

But here’s the thing: most flirting is subtle. So it’s very easy to confuse friendliness with flirting. And vice versa.

Here’s where that other study comes in.

Stanford researchers put subjects through “speed dates.” Then asked them whether or not their partners were flirting.

But they also used something called a “flirtation detection system.”

It was better at detecting flirtation than both the men and women.

I’m going to break down how it works. So, you can keep their findings in mind the next time you wonder if a guy is really coming on to you.

The flirtation detection system is really just a checklist.  The researchers could watch and rewind videos of the interactions and put check marks next to the known signs of flirting.

Of course, this checklist has been validated by comparing it to the actual stated intentions of the men.  (They can ask whether or not they were interested and flirting with a woman after using the checklist to take a good guess).

In the research study, there were specific “flirtation signs” men gave off.  The flirtation detection system was designed to pick up on those signals.  Here are the signals:

When a man is frequently asking you questions in a conversation, it’s a good sign of his interest.

He wants to learn about you. To find connections. To determine your availability. To see if you’re interested in him.

So if a guy sounds like an auctioneer around you, pay attention.

Research has been done showing that people try to match the vocal inflections of someone they’re interested in.

For men, this means speaking in a higher pitched voice. So it’s no surprise that it comes up here.

This is one I hadn’t heard before. Flirtatious men in this study apparently lowered their voices and spoke more quietly.

Perhaps using a quiet tone makes the conversation feel more private. Perhaps there’s something else behind it. Whatever the reason, if a man speaks more quietly around you, he may be flirting.

Both sexes do this, and it also seems like one of the more obvious signs. Still, laughter is something to pay attention to.

Fair warning: men don’t come off too well in this bullet point.

According to the detection system, flirting men tend to use certain words more often, including:

The first one makes sense. The other two… I’m not sure what to say. It may be an attempt to seem powerful or masculine.

I suppose it’s good to know that a man using words that indicate anger or negative emotions isn’t a bad reflection on you.

Here are some other words that can be an indication of flirting. Things like “you,” “we,” “wow,” and “great.” So if a lot of those words are popping up in a man’s conversations with you, he might be interested.

There you have it! Your very own flirtation detection system.

Now, clearly it’s not fool-proof. Context impacts everything. And even the researchers admit their system can only tell if men are flirting 69% of the time.

But that’s a lot better than most people do without relying on a detection system like this.

So the next time you wonder if a guy is flirting or not, see if you notice any of these signs. If nothing else, they can point you toward the men who are already interested in you.