How Your Social Network Can Wreck (or Support) Your Relationship 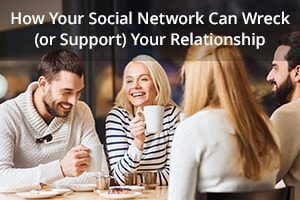 Would you date someone your parents didn’t approve of?

Would you date someone your friends didn’t approve of?

The research is in.

The days of listening to parents are over. You’re much more likely to be swayed by your friends’ opinion.

You get to choose your boyfriend, but they don’t get to choose this new person entering their close-knit circle. They’ll keep a wary eye open, not just for your well-being, but also for the well-being of the group. If he doesn’t fit in, you might be on the receiving end of a high-pressure campaign to boot the guy out.

A study from the December 2015 Journal of Family Psychology[1] found that disapproval from friends is particularly harmful for interracial or same-sex relationships, which can suffer from “lower relationship commitment, trust, love, and sexual communication” as a result.

The study found that disapproval from parents or from the public at large has less impact.

There’s even a term for it:

If your social network approves of your choice of mate, then your relationship gets a boost.

On the other hand, if your social network doesn’t approve, your relationship will struggle. You may stop getting invited to parties and social gatherings. The time you do spend as a couple with your friends may feel stressful. You can end up isolated and on your own.

If you were forced to choose between him and your friends, what would you do?

You can try to prevent anything like this from happening by making sure your friends like him as much as you do.

One study[3] found that the most effective strategy, at least for future in-laws, is to show them what a good influence he’s been on you.

If you’re happy, bubbly and overflowing with well-being, your friends are more likely to try to overcome their initial resistance. If he’s that good for you, the least they can do is try to accept him.

Strategies that don’t work as effectively include trying to win the doubters over by inviting them to lavish dinners or taking them aside to convince them what an amazing guy he really is.

You might also want to consider why your friends are reacting this way. Can they see this relationship more clearly than you can?

Friends you’ve known for ages, who have no personal stake in who you see, can often see the impact of a relationship on you better than you can yourself.

Being in a relationship changes a person. Ideally, those changes will be for the better. But sometimes your friends might notice that you’ve become quieter, more deferential, eager to please, or not quite like yourself. They’ll cast a suspicious eye on him … and they may be right.

But aren’t they just jealous?

One recent study[4] found evidence for a “Juliet effect,” named after the star-crossed heroine’s relationship with her mother. Juliet’s mother was determined that her daughter would marry a boy from a good family, even if it meant ignoring her heart.

Most mothers want their daughters to marry good, solid, steady men. Dashing, exciting heartthrobs may be good to look at, but you don’t want your daughter to bring one home.

So, when your friends are less than enthusiastic about your new boyfriend, it could be because they secretly want him for themselves … but it could also be because they’re worried you’re setting yourself up for a fall. He may not seem like the type who’s going to stick around.

The best way to protect your relationship is to face the disapproval as a team. Don’t allow your friends to divide you. Talk about what’s going on together. Be open about how stressful it is. Assume your friends are just looking out for you, and make sure they know how much the relationship matters to you.

Gaining your friends’ support can make a huge difference. Don’t forget that when you’re the one taking an instinctive dislike to a friend’s new boyfriend. She’s counting on you, too.