Home > Commitment > How to Talk about the Future with Guys

How to Talk about the Future with Guys 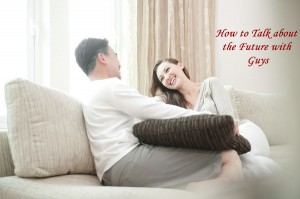 One of the scariest things in a relationship is “the talk” about where things are going.

It’s my opinion that the best time to have this kind of discussion is before a serious relationship develops.

Here’s how you do it.

After you say this, he will realize he’s just had a miniature version of “the talk” with you. He’ll be amazed at how relaxed he felt, which is an uncommon experience for most men when discussing relationship issues.

This positive experience will cause him to be more open to future discussions… and less likely to bolt or shut down when you bring up more specific relationship needs and desires as things unfold.

The primary reason men bolt or shut down during “the talk” is because of a particular kind of fear. It’s the fear of being asked to commit to things he is not ready for.

Men value their freedom, and they often have a misconception of relationships. They often think a commitment means less freedom instead of more happiness.

As a result, you both feel happier with where things are going. Note that one of the keys to making this work is getting him to talk about things he wants. That’s what makes him receptive to hearing what you need and desire.

When you affirm his desires and encourage him to dream big, he realizes you could be a team player in his life, someone who enhances his dreams rather than shutting them down.

It’s what you already want, but this is just a method of helping him to realize it. Assuming you find a man who has the same desire (to encourage you in the pursuit of your dreams) open, positive communication will speed you toward a beautiful future.