Home > Attraction > How to Stop Falling for Your Own Tricks

How to Stop Falling for Your Own Tricks 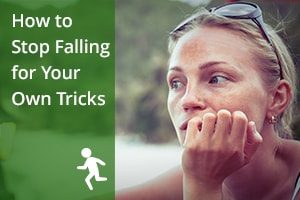 Have you ever wondered why stores use prices like $99.99? Why not just sell the same pair of shoes for an even $100?

Ah, but you already know the answer. It’s a simple psychological trick. If the shoes cost less than $100, even by just a penny, they fall into a lower price bracket in your mind.

But there’s something really bizarre about this trick.

Almost everyone can explain why stores price things the way they do. So why do businesses keep using this trick if everyone knows about it?!

Because it still works.

As business consultant Ash Ambirge explains, “…it’s not because they’re trying to fool you. It’s because we need to fool ourselves.”[i]

And sadly, that makes sense, too. It makes sense because we trick ourselves into making poor decisions all the time.

Here’s how it works. Most of the time, we know what we really want to do. So instead of seriously analyzing the pros and cons, we trick ourselves.

We focus on half-truths. We call our unrealistic expectations “optimism.” We intentionally ignore warning signs, claiming we’re just being spontaneous.

And this doesn’t just happen when you’re shopping. It happens when you make profound relationship decisions, too.

That’s why your brilliant, strong friend ended up dating that complete jerk who took advantage of her awesomeness for months before she dumped him. She tricked herself into making that bad decision.

Because she wanted to.

If you don’t want to make the same kinds of mistakes in your own relationships, you have to learn how to stop falling for your own tricks.

Use the simple checklist below to become untrickable…even to yourself.

1. Obsessively ask one question: WHY?

Before you make any relationship move, ask yourself why you’re making it.

As you ask yourself why, be suspicious of your first answer.

Self-discovery isn’t a fast process. The first motive you identify may not be your true motive. Always push deeper, asking yourself if there’s some OTHER reason why this particular option looks attractive.

Asking yourself why is going to conjure up all kinds of feelings. That’s normal and totally okay. And, your feelings can inform your answer.

But your feelings shouldn’t BE your answer. In other words, “Because I FEEL like I wanna date him!” may not be the best reason to date someone. Especially if it’s the only answer you can come up with.

Instead of letting your emotions be the only factor, also consider your relationship goals.

Decide if you’re dating for fun, for romance, for a long-term commitment, or for some other reason. Then let that underlying reason drive the decisions you make.

3. When you realize you’re fooling yourself, do more than just stop.

If you do the first two steps above, you’ll avoid falling for your own tricks. But let’s go a step beyond that.

After all, now you know what you really want from a relationship. Armed with that knowledge, start plotting a course to make your heart’s true desire a reality.

If you decide you’re only interested in dating for fun right now, there’s no need to have a dating profile on one of those find-your-mate websites. If you’re looking for something serious, there may be better venues for meeting guys than the bar scene on a Thursday night.

Use your new self-knowledge to propel yourself toward your current goals. When you do that, the self-tricking slows down.

There’s no shame in admitting that you’ve fooled yourself a few times in the past. So you bought a purse you never use? That’s okay. It’s even okay if you’ve made a few romantic mistakes.

But if you want to derail the process of tricking yourself, that’s easily done.

Before you make relationship decisions, ask yourself why you’re doing what you’re doing. Then compare your motive to your goals.

If the option in front of you doesn’t take you where you want to go, find an option that does.