Home > Dating > How to Spot (and Attract) a Genuine Romantic

How to Spot (and Attract) a Genuine Romantic 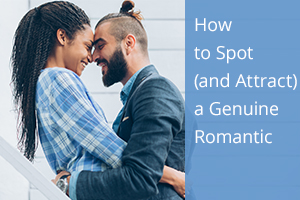 A man she could stroll with along the city streets, window-shopping and ducking into cafés for hot chocolates and pastries.

A man who’d present her with an elaborately wrapped gift box, containing a bracelet he knew she coveted but couldn’t afford.

A man who’d wrap his arms around her as they snuggled on the sofa on a cold night, watching movies and relaxing together.

She’d never been in a relationship like that. But she knew it was possible. She’d seen relationships like that on TV.

How could she find a man who’d fulfill her romantic longings?

Karen had a theory:

If she could be the best girlfriend ever…

The kind of girlfriend who anticipated a man’s every need, who had no needs of her own, who made him feel good, and radiated positive vibes only…

Then her dream man would fall head over heels for her.

You Can’t Get More by Giving More

Karen was making a fundamental mistake…

A mistake that I see so many women make.

She thought she had to “give to get.”

But that’s not how love works.

It turns out that the more we do for someone, the more WE fall in love with THEM!

By investing our time and energy, we become even more emotionally involved.

Meanwhile, the person who’s on the receiving end doesn’t have to do anything. It’s easy for them to take your gifts and walk away.

You’ve probably dated a number of guys who were only interested in how YOU could make THEM happy. They didn’t make an effort.

You may have attracted those guys by your generous nature. They could see how much effort you were willing to put into making them feel good.

It’s time to flip the script.

Find a Man Who Can Give

If you, like Karen, want to find a man who’s romantic and thoughtful…

Then it’s your job to give a man “opportunities” to invest in your relationship.

A man should be able to:

If you’re dating a man who just wants to have fun with you and disappears off the face of the earth if you can’t hang out together, take it as a sign. He’s probably not The One.

How to Spot Fake Romantics

Some men can trick you into believing they’re romantic superstars, when in fact it’s just for show.

These men may lavish material gifts on you—nice dinners, weekend trips—but they don’t give much emotionally.

They expect you to be impressed by the money they’re spending. The big romantic gestures detract from the fact that they’re not giving you anything emotionally.

And maybe you don’t push it. After all, this man is Prince Charming in every other way. It’s okay if he gets the name of your best friend mixed up with your mom’s name. It’s okay if he thinks you like salmon when you actually hate it.

But by the emotional labor he puts in.

He puts real effort into finding out who you are as a person, so that he can support you better.

3 Questions to Spot a Keeper

If you’re dating a man right now, and you’re not sure whether it’s going anywhere, ask yourself these 3 questions:

Then ask yourself one final question:

“Am I telling him what I feel, need, and want?”

A true romantic wants to know what you need, so he can support you. But it’s hard going if you won’t tell him for fear of being seen as needy.

In the end, romance isn’t about the fancy gift box or the trip to Paris. It’s about emotional connection. A man who cares deeply about your needs and your feelings is one worth holding onto.