Home > Dating > How to Spot an Energy Vampire

How to Spot an Energy Vampire 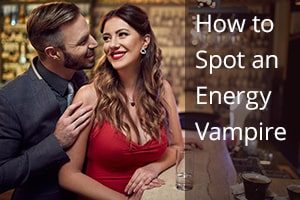 We love vampires as long as we know they’re not going to show up in our homes to drink our blood. 😉

Vampires are all the rage right now in the world of fiction. But how did the idea of vampires find its way into the minds of the original, ancient storytellers?

We seem to have an intuitive understanding that there are people out there who prey on others.

They don’t suck their blood, of course. Not literally.

But they do figuratively-speaking. Because they drain our life energy.

Frenemies are friendly and polite to you—on the surface. When you’re not looking, they delight in undermining you at every turn.

We love to watch frenemies on TV. The juxtaposition of nice and nasty is thrilling. But those people aren’t so pleasant to have in our lives.

There’s a similar concept at work in dating.

There are men who will love bomb you. They’ll flirt and flatter you. They’ll make you feel special, one-of-a-kind. They’ll be flabbergasted that someone hasn’t snapped you up yet. When you’re with them, you’ll feel overwhelmed with all that amazing attention. Wow!

But they’re pumping you full of good feelings for a reason. They want to see what makes you tick.

Once they figure you out, they have power over you. They’ll ask you to do little favors. They’ll take advantage of your generosity and goodwill. They know you never think badly of anyone, so you won’t catch on. You’ll just keep giving, because that’s what you do.

These folks are called “energy vampires.” They’re just as real as you or me.

And being able to spot them quickly can save you a world of trouble.

Do You Ask for Enough from People?

What energy vampires look for is someone who has a LOT to give.

When you have so much to give and no one to give it to, it’s painful. You’re born to help others. You want to heal everyone out there who’s broken.

That’s wonderful. But it’s only half the puzzle.

You have your own needs and desires. Wouldn’t it be wonderful if you met someone who wanted nothing more than to give to YOU?

Wouldn’t it be even MORE amazing if you found someone who wanted to serve you as much as you wanted to do the same for him?

That’s the thought that scares away energy vampires and attracts great men.

You’ll meet a lot of men who have their own sad story about what was done to them and how hard they’ve struggled. Their stories will break your heart. You’ll want nothing more than to show them that love can be different.

I urge you to set your sights on a different breed of men.

Men who have a story about the positive impact they’ve made on the world. Men who are proud of the value they’ve contributed and the service they’ve made. Men who understand that setbacks happen and life is hard, but whatever. This is about the future, not the past.

A man who plays on your heartstrings knows it’s an easy route to your heart.

A man who inspires you with his resiliency, insight and love has the strength to hold your heart.

So try this the next time you wonder whether a man has the right intentions.

Ask him for help.

Maybe you received bad news and want moral support. Or you’ve double-booked your schedule and need help filling in. Or something has broken and you can’t figure out how to fix it.

Present it as an emergency. Something you need him to drop everything for.

Will he do it?

Energy vampires don’t like to give without the promise of getting something in return. They want to hear you say, “If you do this for me, I’ll do that for you.”

Men of service are used to being relied on. They understand that we are all here to help each other. They don’t mind dropping everything to help you, if your need is genuine.

Let a man know how much you love, care, and depend on him.

Energy vampires want to hook you in, but they don’t want you to get too comfortable. They respond to your love with sarcasm or criticism. The more loving you are, the more negative they become. The more they push you away. They don’t want your love; they just want to use you.

A man of service will flourish under the warmth of a woman’s love. Your love will fill him up. He’ll do more, be more, achieve more, all because you love him.

So don’t assume vampires exist only in the movies.

Real-life vampires exist, and they can prey on you.

They don’t have sharp teeth or wear black cloaks. Rather, they see other people as useful resources. As a source of supply, rather than fellow human beings to serve.

No matter how much they love-bomb you, you don’t want to get involved.

Choose a man of service. Someone who can give to you just as much as you give to him.