Home > Dating > How to Spot a Guy’s Underlying Character

How to Spot a Guy’s Underlying Character 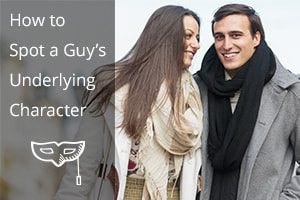 Do you know how to spot a guy’s underlying character? If you don’t, it’s all too easy to end up with a guy who’s not worth your time.

Here’s what I mean.

Jenn and Lisa are best friends. Both recently started dating someone new. Like most friends, they compare notes.

The other day they were having coffee, and Jenn described how her guy was in a foul mood on their last date. He wasn’t rude toward her. But he was short with the waiter at the restaurant and the usher who took their tickets at the theater. He even snapped at the guy who parked the car.

Lisa had a similar experience with her new beau. A work meeting went poorly and it showed throughout their entire date. But at the end of the night, he addressed it. He explained why he was in a bad mood, took responsibility for letting it affect his behavior, and apologized.

“I’m sure your guy apologized to you, too,” Lisa said to Jenn.

Jenn shook her head. “Nope. That’s how he usually is. I mean, he’s always sweet to me, but he knows how to get his way. People learn not to cross him the hard way.”

Right about now, you’re probably thinking the same thing Lisa thought. Lisa’s guy was having a bad day, but that’s not the norm. Jenn’s guy just sounds like a jerk.

The difference is a state versus a trait.

A state is a one-off situation, like being short because you’re having a bad day. A trait represents a pattern of behavior. Happily-ever-after hinges on learning to spot the difference between the two.

Fortunately, it’s pretty easy to tell states and traits apart —when you know what to look for. I can help you there.

How does he treat “powerless” people?

Malcolm S. Forbes is crediting with saying, “You can easily judge the character of a man by how he treats those who can do nothing for him.” Boy, is that true.

You can tell a lot about a guy based on how he talks. Not to you, but to all the people around you. People like servers at restaurants, attendants, ticket-takers, strangers in line and check-out clerks.

His default behavior toward these people will paint a picture. Pay attention to it. If he’s kind to people he doesn’t have to be kind to, then there’s a good chance he’s a decent guy.

When we’re tired and hungry, we become very self-focused. After all, those two sensations are pretty hard to ignore. So when your guy is tired and hungry, you’re going to get a sneak peek at the foundations of his character.

A little crankiness is understandable. That happens to a lot of us. A full-blown meltdown is a bad sign!

The next time you two do something active and have to wait a little longer than normal to eat, keep an eye on his mood. If he remembers to be thoughtful even when he’s tired and hungry, he could be a keeper.

What does he do when he screws up?

Some guys backpedal. They shift blame, or justify their behavior, or insist that you just don’t understand the complexity of the situation. And some guys own up to their error and apologize.

Disagreements in dating relationships aren’t pleasant, but they can be helpful. It doesn’t even matter who’s right and who’s wrong. What matters is how he treats you when he thinks he’s right and you’re wrong.

If he’s a gentleman then, hang onto that guy.

I want to clarify one really important thing before closing out this topic. Focus on finding positive traits rather than exposing negative ones.

Everyone has flaws, so every guy is going to miss the mark sometimes. That’s not necessarily how to spot a jerk. What you want is a guy whose positive characteristics shine through, even when the situation isn’t ideal.

Guys like that are out there. And when you know what to look for, you’re far more likely you’ll find one.