How to Let Your Hair Down in Front of a Man 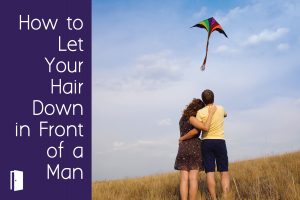 Would you rather be the “cool chick” or the silly one?

For many women, there’s no contest. Cool rules.

It all goes back to the halls of high school, where many of us learned how relationships work. Showing any emotion, whether shrieking with joy or bursting into tears, earned the same shaming stare.

The only safe place was that indifferent zone of complete unconcern about anything. Don’t feel. No one can bother you that way.

Then we grew up. We took the code of cool into our adult relationships.

Don’t let him know you like him, or you’ll put him off.
Don’t get too excited, or you’ll jinx it.
Don’t be too enthusiastic, or he’ll think you’re crazy.

And they’re keeping their emotions tamped down so tightly there’s no air left to breathe.

It doesn’t help that mainstream dating advice warns against letting him know your true feelings. To be mysterious, you’ve got to stay cool. You’ve got to stay in control. Everything must be calculated to present yourself in the best possible light.

But then there are those darn rom-coms.

Romantic comedies present a different possibility for falling in love.

They suggest that you can make mistakes, do really stupid things, be goofy—ridiculous, even—and you’ll still be irresistible to the right guy.

Must you stay cool and mysterious? Or can you let your silly side show?

It all depends on trust.

A man can easily be attracted to a cool and mysterious woman. But if she holds herself back indefinitely, he’s not going to offer her a ring; he’s going to go find himself someone with warmth and humanity.

Some people act silly from the start because they want to get laughs. Perhaps they were high school clowns who couldn’t get attention any other way. That isn’t what we’re talking about here.

We’re talking about being vulnerable. Revealing that part of yourself that finds certain things absolutely hilarious. That part of you who’d happily play with a five-year-old on their level.

Your silly side is very childlike. It’s one of the oldest parts of you. You mastered silliness before you even knew what the word “cool” meant. Then you buried it as you grew, because it was too childlike. It didn’t fit who you wanted to become.

Our relationships need to be safe for silliness.

Silliness comes in many flavors: knock-knock jokes, shower singing, crazy dancing, a passion for frog figurines, or celebrity impressions. When we can be silly with someone, we’re entrusting them with our hearts.

It’s easy to shame someone who’s sharing their silliness with us. All it takes is one frown, a roll of the eyes, or two cutting words: “Grow up.”

By the time we’ve grown into adults, most of us have been shamed for our silliness enough that we won’t let anyone see it. Least of all the person we want to adore us.

But silliness creates a bond that coolness can’t touch. When you can be silly with someone, you can never think of them the same way. You just want to laugh and smile when you hear their name.

The trust has to be there first. Don’t share silliness with someone you’re unsure about. But if you really like him and he really likes you, then take the first step.

A low-risk way to introduce silliness into a relationship is by enjoying funny movies or comedy shows together. Try acting like grown-up kids for a day: go on the rides at an amusement park, fly a kite, or eat ice cream cones on the beach.

Let your hair down. Treat him to the sheer pleasure of a belly laugh. Worry less about controlling the conversation.  Let it flow toward silly subjects once in a while.

Be the opposite of ice cool. After all, it takes warmth to light the flame of passion.