How to Know When It’s Time to Move On 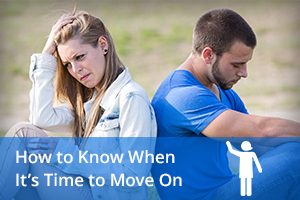 How do you feel about the idea of quitting?

I mean quitting on a relationship when there is still a mix of both good and bad. Your stomach just rolled, didn’t it?

Yeah, I feel the same way. I don’t like the notion of giving up, either. And we’re not alone.

How many times have you heard, “Winners never quit and quitters never win?” Our culture has this shared conviction that it’s always noble to press on, even in the face of overwhelming odds.

That’s why we like movies about underdogs, from Rudy to The Devil Wears Prada.

But what if you’re after something that’s genuinely unattainable? What if you have a goal that you really can’t reach? What if you’re the underdog, but it’s impossible for you to come out on top?

Psychologists Gregory Miller and Carsten Wrosch asked that very question. They spent a year tracking 90 teenagers who were goal-setters. The ones who couldn’t let go of their unachievable goals paid for it with their health, showing early signs of conditions that lead to diabetes, early aging, and heart disease![i]

The researchers’ conclusion was simple. There are times when quitting is the best option.

Ready for this to get WAY more personal? Think about that truth in light of your dating life.

Which begs the question, how do you know when it’s time to give up on a relationship and move on?

Counseling psychologist Will Meek has a simple rule for knowing when to give up. He says it’s time to call it quits “when something is not improving with substantial effort.”[ii]

Relationships are just like any other living thing. When they’re healthy, there’s growth.

Think about the beginning of a romantic connection. The two of you are all about talking for hours, deeply invested in getting to know each other. You want to spend all your time together, go on adventures together, and explore the world together.

Relationships that are meant to last will continue to thrive, even beyond the infatuation stage.

But if you get to the point where growth stops, that’s a bad sign. Then it’s time to ask yourself some serious questions.

Have you made a sincere effort to rekindle the passion? Have you asked him what he needs from you? Are you doing your best to be the person he fell for in the first place? Have you told him what you want out of the relationship, yourself?

If you answered “yes” to those questions, but there’s no momentum building toward improvement, then it’s likely time to move on.

I know that’s not an easy thing to hear. We all hate the idea of giving up, and it always hurts when a relationship comes to an end.

But the ultimate goal is to find someone who really gets you. If you can’t have that with your current partner, it may be time to end things and find a better match.

Don’t get stuck in a situation where you can’t win.

If your current relationship has hit a wall and none of your efforts to get it back on track seem to be working, be brave enough to consider moving on.

You deserve happily ever after. Sometimes the trick to winning is to quit.