How to Find a Man Who Treasures You 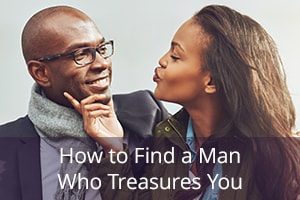 Amanda came to me with an interesting concern.

She was reading romance novels. Nonstop.

And every time she did, she felt like crying. Because her relationship was so far from the love depicted in those pages.

“I wonder if it’s me,” she said. “If I was more amazing, maybe Gary would feel that way about me, too. But then, he’s not exactly a storybook hero himself.”

Amanda and Gary had been together 5 years but had known each other much longer. Amanda loved Gary very much. Being in a long-term relationship suited her. She took great pleasure in looking after Gary and making their life together fun.

He was a good man and a hard worker, but romance wasn’t built into him the way it was built into Amanda. He was happy sitting on the sofa chilling out every night. He didn’t really care if they went out or if Amanda made him something special or if she dressed up for him.

“James, I want Gary to treat me like the men in my books treat their women.” Amanda leaned forward. “I know I’m not perfect, but I’m still a catch. Gary should feel lucky to have me, and he doesn’t.” Her mouth set in a stubborn line. “He just plain doesn’t.”

I get this kind of question all the time:

“How can I make my man appreciate me?”

“How can I make him treasure me like he used to?”

I think it’s great that women are asking that question, because it means they’re embracing their own value. They’re seeing their own worth. (I call this the A+ Mindset.)

But I also know what it’s like from a man’s perspective. Not all men know how to be romantic storybook heroes.

“Can I ask you something, Amanda? Does Gary have anything he really values? A friendship or family member, a vehicle, or even his phone?”

Amanda frowned as she thought. “He likes his car. He likes his phone. But they’re more tools to him than anything else. Like, I don’t think he’d care if he had to replace them.”

“How would you say Gary treats the people or things that are most important to him?”

“Casually, I guess? He prides himself on not much mattering to him. He’s easy-going.”

“So, if he treated you casually, it wouldn’t necessarily mean you’re not important to him. It would just mean he’s a casual kind of guy.”

“You know that saying, ‘A leopard can’t change its spots’? Is it possible you want Gary to change who he is for you?”

Amanda stared off into the distance. When she finally spoke, her voice was so low I had to strain to hear. “Yes. I do.”

Wanting your guy to be different is completely normal. I don’t think anyone gets through a relationship without wishing they could tweak some of their partner’s more annoying traits.

But love asks something else of us.

When I talk to women who are just starting their dating journey, I suggest they look for a “treasurer.”

A treasurer is a very particular kind of man. You can spot him by how he treats the people and things he values.

He treats them with loving care.

Maybe it’s a younger sister, or maybe it’s a shiny pickup. Maybe it’s a gadget he spent a fortune on or a guitar he’s had since he was 13.

Treasurers take care of what they love, because they feel responsible for the riches they’ve been blessed with.

Contrast that with the guy who takes what he has for granted. He’s always interested in getting more. But once he’s got it, he doesn’t look after it. Why should he? It’s his now. He can treat it however he likes.

Treasurers have a different perspective. What they value most is not the things they own or the people they love. It’s the relationship they have with those things and people.

A treasurer doesn’t treasure the woman he’s with as much as he treasures the love he shares with her.

Would you say you’re a treasurer?

Do you take responsibility for the quality of love in your relationships?

I suggested to Amanda that (even though it’s not fair) it might be easier to change herself than Gary. Could she work on treasuring their love, rather than just being a good girlfriend?

She’d never thought of it that way before. “I thought all I had to do was take care of Gary, and it was enough.”

“Maybe your love has different needs,” I said.

What makes your love flourish? Whatever it is, do more of that. It’s a simple idea that works.