How to Deal with Him when He’s Stressed Out 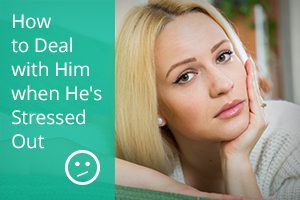 You already know that guys and girls handle stress differently. You’ve seen that reality in action.

Think about the last time your guy had a really chaotic day. Maybe things went sideways on him at work, or his car broke down, or there was some kind of family drama. How did he handle it?

If he’s like most guys, he went into problem-solving mode. That’s what guys do. And it often involves being short or ignoring you.

By contrast, women tend to seek empathy and relational connection when they’re stressed. That’s why you feel compelled to talk to a trusted friend on bad days.

But the difference goes even deeper.

When guys are stressed, they get very pragmatic. Emotions get in the way of problem-solving. So, he’ll repress his feelings to give himself the mental space to find a solution. [i]

Which technique is better? Neither. They’re just different. But the difference is crucial.

How crucial? I’ll put it this way. If you don’t have a strategy for dealing with him when he’s stressed, the two of you could end up butting heads when he needs your support the most.

So how do you handle a stressed out guy?

There are three easy things you can do to play the perfect support role when he’s overloaded.

First, recognize that he handles stress differently without criticizing his approach.

Unfortunately, some women mistake the average guy’s instinct to repress feelings in the midst of stress as a form of immaturity. In reality, it’s more of a tactical move. In fact, in emergency situations, it can be extremely useful.

Granted, his response to a stressful day at the office may not make emotional sense to you. It’s not how you would handle the same kind of day. That’s okay.

BOTH of your strategies are valid.

Of course, even if you accept that his approach is valid, it can still be tempting to try to get him to adopt your coping mechanisms. Which brings us to my second piece of advice: don’t do that.

Here’s what I mean. He tells you he’s stressed. You would want to talk through how you feel, but he clams up. You can tell the wheels are turning, but he doesn’t share what’s going on in his head.

Don’t push him to talk!

He’s working through the problem, trying to find a solution. Let him tackle stress the way he’s naturally inclined to. Don’t try to get him to share simply because that’s what you’d want to do.

Which brings me to my final tip. Instead of trying to get him to open up, roll with his strategy. Give him a bit of mental space, so he can think through whatever has him stressed.

He’ll most likely let you know which he needs. And if he doesn’t, you can always ask.

Just know that by supporting his preferred mode of stress management, you’re supporting HIM.

Men and women are alike in a ton of ways, but how we handle stress is one area where we’re noticeably different. Neither gender does stress “the right way.” Instead, we choose two different but perfectly functional roads.

When he’s stressed, he needs your support. The best way to give it to him is to accept and validate his stress management.

In those moments, give him the mental space he needs to be the problem-solver he is.