How to Date a Dad 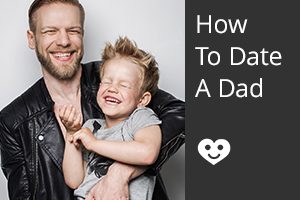 You’re finally dating a guy who all your friends simply refer to as “a great catch.” He’s smart, funny, attractive and totally sane.

But there is one problem—he’s a dad.

Look, I know you have no problem with dads or kids. But this does complicate things.

It complicates things because this “great catch” is in a joint custody situation.  And he’s often busy. As a father, he’s sometimes completely unavailable.

And to make matters worse, his ex-wife may be someone you have to deal with on occasion.  She might even show up when the kids are with her…at a moment when you thought you had “dad” to yourself.  Like in a situation where she needs to look for a missing shoe and homework assignment one of the kids left at his place.

So naturally, you’re asking yourself, can I handle this? Am I ready to date a dad?

Unless you’re restricting your dating prospects to men under 30, chances are, you may end up dating a dad at some point.

In 2013, an estimated 17 percent of single parents were men. That’s equivalent to 2 million men nationwide.

There are also many reasons why single dads are a great catch.

First, caring for another human being changes people. A dad has less time to make small problems the focus of his attention.  So he may be more accepting and less interested in arguing over little things.

Caring for another human being also teaches patience. Parents understand that everyone does things at a different pace.

Finally, caring for another human being puts things into perspective. Parents know that no one needs to spend $150 on a bottle of champagne to celebrate a milestone.  Parents find joy in all sorts of places.

So what’s the upshot of dating a dad?

Dating a dad gives you a chance to date a guy with greater emotional depth—a guy who knows who he is, what he wants, and how to give back.

Okay, so you’ve decided that you’re into this idea. You’re going to date a dad.

But how do you make this work? The following ground rules can help—

1.) Throw out the ground rules you’ve followed in previous dating situations. Accept the fact that this is going to be different.

2.) The kids are part of the package. No good parent is going to date someone who can’t accept that their kids are their first priority. To put it bluntly, get on board with this or get out.

3.) The ex is part of the package too. Unless you’re dating a dad who is widowed, his ex is going to be on the scene. And if they are decent people, they may have found a way to remain friends for the sake of the kids.

4.) Even if you’re dating someone who makes a lot of money, the budget could seem tight.  Don’t assume you’ll be going on a cruise once a month. Dads have other priorities for their savings.

5.) Don’t be a diva! Kids get sick. School concerts can go 2 hours past the expected end time. Sometimes your plans will be delayed or cancelled.

Still in for the ride? There are 2 million single dads out there waiting to find a match!