How to Be More Likeable… by Admitting to Embarrassing Truths 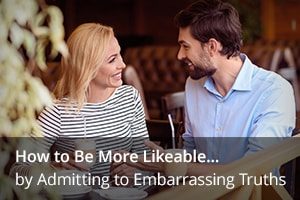 Two people are on a first date. They barely know one another. They’re just feeling each other out.

MAN: Yeah, I guess I like to keep active. My buddies do this flag football thing every weekend.

WOMAN: That means no tackling, right?

MAN: (laughs) Yeah, that’s exactly right. How about you? What kind of stuff do you do?

WOMAN: (shrugs) You know, I try to get to the gym. Try being the key term in that sentence.

WOMAN: I do yoga. There’s a mountain trail I run on when I can.

MAN: I love mountain trails. I ride my bike around Fryman Canyon every weekend if I can. Do you ride?

WOMAN: (pause) Not much. Did you see that new DiCaprio movie?

Because she doesn’t know how to ride a bike. But she didn’t want to tell him.

She felt embarrassed. She was worried he’d think less of her.

We do things like this all the time. We feel awkward or embarrassed, so we skirt the question.

But according to research studies, the opposite is true.

When people sense that you are withholding information or avoiding a question, they like you less. Which is probably pretty obvious. If you think someone isn’t being upfront with you, it’s hard to trust them

But the studies reveal even more…

In the study, this was even true for some pretty bad disclosures.

For example, participants answered a question about whether or not they had ever lied to a partner about having an STD.

Some refused to answer. Others admitted to lying.

This doesn’t mean you have to admit to everything. Especially not all at once.

It just means you should be willing to disclose sensitive information when the opportunity arises. The key is to let things out in the natural flow of conversation.

If he asks you about going on a bike ride and you don’t know how to ride, admit it.

Be self-effacing about it. Embrace your embarrassment.

As an added bonus, it will probably make him more willing to be open with you.

Plus, you could end up creating additional opportunities to connect.

Let’s revisit the end of that earlier conversation:

WOMAN: I do yoga. There’s a mountain trail I run on when I can.

MAN: I love mountain trails. I ride my bike around Fryman Canyon every weekend if I can. Do you ride?

WOMAN: No, I mean that literally. Like I never learned how to ride a bike.

WOMAN: I know, I totally suck.

WOMAN: I tried when I was little. You know, how everyone tries. But I never got the hang of it, and I gave up. You probably think I’m ridiculous.

MAN: Well, you are ridiculous.

MAN: But you’re not alone. Know what I never learned to do?

WOMAN: Really? Oh my gosh, I wouldn’t have survived summers as a kid without swimming! How did you do it?

MAN: I was really sweaty. A lot.

MAN: Wait, do you want to learn?

MAN: Yeah! I can teach you.

WOMAN: I don’t know. I have pretty bad balance. It could take forever.

Look at that. They connected on missed childhood opportunities.

It wasn’t embarrassing – it was a shared experience of sorts. And they’re making it a reason to see each other more.

All because she decided to put it out there.