Home > Dating > How Many Dates Does It Take to Know if You Like Him?

How Many Dates Does It Take to Know if You Like Him? 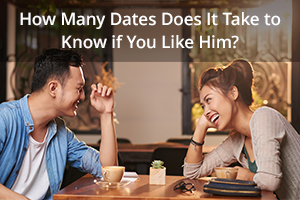 That first date is make or break.

Either you feel a connection, or you don’t.

You’re just not feeling it with ANYONE.

Sometimes you like the guy. But you’re not sure if there’s chemistry.

Is it the guys you’re picking? Do you need to adjust your criteria?

Is it you? Are you expecting too much?

When the truth is, it takes at least a few.

Romantic books, movies, and songs all tell us that love happens at first sight.

Your eyes meet across a crowded room, and you just know.

If you don’t feel chemistry from the moment you lay eyes on him, then he’s probably not the one.

Even though love at first sight makes a good story, it doesn’t accurately describe how love works. (Love can happen instantly, but that’s not the norm.)

You can’t tell if a man has what it takes to commit or cultivate intimacy in just one date. One date isn’t enough to tell you how he will treat you over time.

So keep chemistry in perspective. You want the WHOLE package: a man who’s good to you, deeply committed, and supportive emotionally.

To find out that, you’ve got to get past the first-date barrier…

First Date Can Be Misleading

A man isn’t going to show you his true self on that first date.

He’s nervous, he doesn’t know you, and he’s trying to be what he thinks women want.

You don’t really start getting to know a man until you’ve seen him more than once.

That’s when he starts to relax.

That’s when he starts revealing himself.

So try to avoid drawing conclusions about him on the basis of just one date.

Obviously, if there’s absolutely no connection, you don’t have to see him again.

But if you have a good conversation and you find him likable, if not particularly impressive, you might want to give him the benefit of the doubt.

There’s more to him than what you learned on that first date. It might be the second date when he really starts to shine…

And a powerful attraction factor will start kicking in, one that’s been responsible for more marriages than most of us can even imagine…

How We Used to Fall in Love

Just 30 years ago, it wasn’t common to meet your future spouse online.

Most married couples met through friends and family.

Others met through work, college, and church.

When people met each other through friends or work or college, they didn’t necessarily jump into a relationship. They got to know each other. They developed a connection. Over time, that connection sparked into something bigger.

Some research has found that relationships are stronger if you knew each other for some time before you started dating.

Your relationship didn’t have so much pressure on it from the very beginning. You didn’t have to make a decision about whether you had a future with this person after only seeing them once. You got to know each other gradually.

What you may not have realized is that getting to know someone increases your chances of falling for them.

The more often you see someone—whether at the gym, in your neighborhood, or on a handful of dates—the more you tend to like them.

This is known as the mere exposure effect.

And we don’t even realize it’s happening!

We think the reason we like them more is because we’ve gotten to know them. But, in fact, what makes you feel positively disposed towards someone is seeing them often, even if you never talk to them.

Can you see now why online dating puts you at an immediate disadvantage?

Most potential couples only see each other once—on that first date!

They don’t have the chance for the mere exposure effect to kick in.

But now you have information that most people don’t have.

You know that seeing a man more than once increases your chances of liking each other.

So give him a chance. If he’s likable enough, make time for a second or third date. See if he grows on you. True love doesn’t have to happen at first sight.