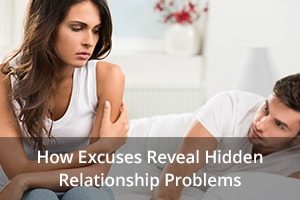 I’m sure you’ve experienced the frustration of hearing an excuse when you try to point out a problem to your boyfriend.

Sure, there are times when it’s perfectly valid to offer an excuse. I mean, come on…sometimes the traffic really was horrible. Or you legitimately didn’t have time to call.

But most of the time we make excuses to protect our egos. Rather than admitting we made a mistake, we justify poor choices.

That strategy just doesn’t work well in relationships. Because a pattern of excuses will drive a wedge between you and your partner faster than the Kardashians can spin family drama into a new reality show.

Just like you, your guy can tell when he’s not getting the full story.

So, before you give your guy an excuse, ask yourself the following two questions.

Let me show you why these two questions will send your relationship in the right direction.

You and your guy are on the verge of a fight. He’s upset because of something you said or did. Your knee-jerk reaction is to go on the defensive.

Ask Yourself: “Is this an excuse he’s heard before?”

If the answer to that question is yes, then you’re probably dealing with some kind of on-going issue. It’s bigger than this one moment of conflict.

Giving him the same old excuse isn’t going to break the cycle.

Instead of falling back on an excuse, acknowledge that the two of you are hitting a familiar snag. If you can, take at least some responsibility, yourself, for taking action to change the future.

For example, if he’s upset because he feels you’re overly critical of his best friend, you might say, “You’re right. I do criticize him a lot. There are things about him that bother me, but there’s probably a better way to communicate that.”

Is there anything underneath this relationship excuse?

You’ve been giving your guy the cold shoulder. And it’s because he said or did something that hurt your feelings. Now he’s asking why you’re ignoring him. So it’s very tempting to justify your passive-aggressive behavior by mentioning his screw-up.

Ask Yourself: “Am I really anxious, angry or afraid?”

Anxiety, anger and fear are powerful emotions. It’s very easy to let them control your decisions.

If there’s real emotion behind your actions, don’t hide it with an excuse. Own the emotion.  Let him see it.  Don’t hide it behind anger.

Talk to your guy about what you’re really feeling.

In the example above, just explain that he hurt your feelings. That’s why you’ve been distant. If you really want to make the communication count, consider admitting that a passive-aggressive response wasn’t the best option.

Now the stage is set for the two of you to have a real conversation instead of just pointing fingers.

Here’s the cool thing about ditching excuses and rocking the truth. As you model this kind of mature approach to conflict, there’s a good chance your guy will respond in kind.

Since you probably don’t enjoy lame excuses from him any more than he likes getting them from you, that’s good news!

Apart from the rare occasions when excuses help explain a shortcoming, most excuses just get in the way of relationships. They can even devastate trust.

Watch for repeat excuses. Use them as a guide that points to things that need to be fixed.  And never be afraid to talk about the emotions underneath your behavior. When couples learn to sidestep excuses, real intimacy can blossom.