Home > Dating > How Do You Make a Man Like You? 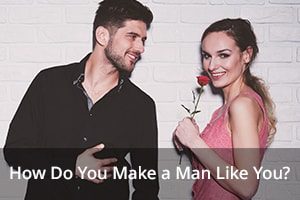 I love it when I get asked:

It’s a fantastic question. Because we all want to be liked.

We want to make friends, or win fans, or excel at networking. We want the social approval that smooths the way to success.

But where the question gets really interesting is with respect to romance.

To a certain extent, the same skills that help you win friends also help you attract the opposite sex. Being friendly, approachable, and interested in other people always helps.

Mindset matters, too. If you believe you have to “make” people like you, you end up performing like a trick horse to win their attention. But if you genuinely believe that everyone loves you already—they just don’t know you yet—your confidence wins hearts.

But romance is different from winning friends in one important respect:

You want him to be interested in you as a potential girlfriend. And that means he’s got to look at you differently than his other female friends. There’s got to be a spark of intrigue, chemistry, and a deeper sort of fascination.

How in the world do you whip up that potent cocktail?

Do you make sure you’re always looking as sexy as you possibly can—without being too obvious? Do you flirt so subtly he’s never quite sure if you mean it?

Do you alternate friendliness with coolness, so you keep him off guard?

Here are three lesser-known tactics that work just as well.

One of the biggest blocks to attraction is being emotionally or energetically closed off.

Envision a woman who’s in love with her co-worker. He sits just a few cubicles down from her, but she’s too afraid to make eye contact or stop and chat with him. She wants him to like her, but she’s afraid of making a move in case he rejects her.

There’s an easy way to reduce the risk of rejection, and that’s by opening yourself up emotionally to any new relationship, whether it’s romantic or not.

How willing are you to stop and have a chat with a stranger? How easily do you make eye contact with the checkout clerk, the people waiting in line with you, or the guy making your latte? How quickly does a smile spring to your lips?

When you’re emotionally open to allowing new people in your life and you’re ready for the possibility of a romantic relationship, the particular man you’re interested in can’t help but get swept up in it. He sees you talking to other people, and suddenly he has a craving to find out more about you.

It’s easy to jump to the conclusion that a man is perfect for you, even though you don’t know him very well. You can feel it in your gut. Everything inside you feels more alive when you’re with him.

But humans are like onions: we’re made up of many different layers. The layer you see right now excites you, but you don’t know what lies underneath.

You can’t know whether a man is right for you until you’ve peeled back some of those layers. So don’t put him on a pedestal just because he made a good first impression. Don’t assume anything about your compatibility until you’ve been out with him a few times. It can take months before you get to know the real him.

It’s a strange thing, but healthy men would rather you saw him as a flawed human being who makes mistakes than a demigod who can do no wrong.

We often think of attraction as a passive thing. He looks at you, and wham! He realizes you’re the love of his life. 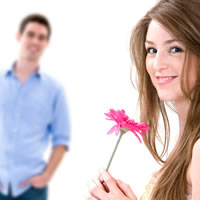 It doesn’t work that way. Attraction is action. He falls for you with every conversation you have and every experience you enjoy together.

So don’t wait for him to finally realize his feelings for you. Instead, start building a relationship now, based on offering experiences of value to each other.

Does he like talking about his band? Then be a willing audience. Does he know about something you’ve been trying to learn? Ask him to teach you.

Become someone whose company he values. It’s not about winning him over with your wit or scintillating conversation. It’s about knowing what he values and being part of that.

A woman who’s emotionally open, level-headed about the guys she meets, and tuned into what matters does quite well in the dating game, even though she doesn’t look like the sex siren we expect.