Home > Dating > This Is What Guys Really Care About

This Is What Guys Really Care About 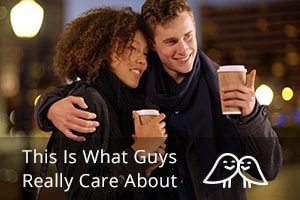 What does your guy value more than passion? Do you know?

The answer may surprise you.

Passion is pretty powerful. Men and women alike feel drawn to it. All of us want a life filled with passionate moments. But there are things that matter to us even more than passion.

So what would a guy pick over a passionate, sordid fling? Brace yourself. Your guy would rather have . . . a solid “bromance” than a relationship based on raw passion and little else.

A bromance is pretty much what it sounds like. It’s an intimate friendship between two guys who feel like they can really rely on each other. It’s like they’re a couple, minus the physical intimacy.

Recently, some researchers were curious about how seriously men take bromances. Do these male-to-male platonic connections really compete with the connection men feel with their girlfriends? The answer is no—because there is NO competition.

Bromance wins, hands down. Given the choice between a fiery fling and time with a bro, most guys will pick the bro.

That’s because men’s emotional needs are more complex than you might think. Said another way, guys deeply value what they get from a solid platonic friendship.

There’s an important word in that last paragraph. Typical.

The typical romantic relationship doesn’t meet the needs men really care about. But here’s the good news. You’re not a typical woman, and you’re not trying to create a typical relationship with him.

You don’t have to compete with the bros in your guy’s life. You just have to create the same kind of open, safe space that he feels with his male friends. And that’s not as hard as it sounds. After all, you’re probably looking for the same things from him!

If you want a romance that beats the pants off of any bromance, there are three key ingredients. When these three things are a part of your romantic connection, you’re set up for a relationship BOTH of you will find magical.

Men (and women) want to be able to be themselves. Most men feel like they can discuss personal stuff, like health issues, more freely with other guys than with their girlfriends.

Why? Because the need to impress is lower with guy friends. It’s ironic, but guys bond more when they admit their weaknesses. Yet men often hide their weaknesses from women due to the hero instinct. We men want you to admire us for our strength.

The solution? Praise any self-disclosure (no matter how small) as an indication of emotional strength.

When he tells you about his feelings or his doctor’s visit, just be supportive. Don’t baby him.  Instead, say things like, “I know how that feels.”

2. This is a judgment-free zone.

Guys worry about saying the wrong thing in front of women. They’re especially careful about what they say about other women in front of you.

My advice here is to be both realistic and appropriate. He’s likely to have friendly relationships with other women. Getting all jealous at the mere mention of another female will push him away. Instead, crank up the trust.

The only time I would advise you to object is when his comments go over the line. Observing that another woman has attractive qualities (e.g. “You know, your friend with the really pretty eyes) is okay. Talking about what he’d like to do with her is NOT.

Men have one central complaint here. They feel like women have a harder time letting go of the past than their male friends. Even if an issue has been resolved, they fear it’ll come back up later in another fight.

To be fair, there are both women and men who hold grudges. This isn’t about gender. But it’s still a concern guys have.

You can squash this fear by making sure you don’t keep a scorecard of past wrongs. When you forgive him, let it go. Don’t ever use resolved grievances as recycled ammo.

In all three areas, guys really just want to be accepted and appreciated for who they are without having to play any games. In my experience, that’s what women want, too.

If you work with your man to create this kind of romance, you won’t just be meeting his needs. You’ll be meeting your own needs, as well. That’s the kind of win-win that makes for a beautiful happy ending.