Home > Commitment > Go Ahead, Get Mad at Him (Just Do This First)

Go Ahead, Get Mad at Him (Just Do This First) 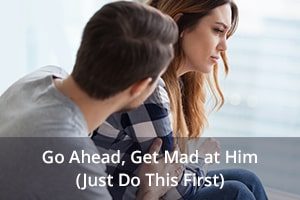 He did it again.

That THING that annoys you.

You know better than to talk to him about it. You’ve tried that. Nothing changes.

When you’re lying in bed with him at night…

You can’t stand the sound of his breathing. How he takes over the bed. The simple fact of his existence.

But the story doesn’t end there.

There are some things you do.

Things that annoy HIM.

And he knows he can’t talk to you about them, because you’ll just get upset and defensive.

He’d rather have a happy home than have you mad at him, so he bites his tongue. He doesn’t say anything.

And sometimes when he goes to the gym or meets up with his friends, he doesn’t want to come home. He doesn’t want to have to guess what kind of a mood you’ll be in. He wishes life with you didn’t have to be so complicated.

Every day, in households across the world, men and women are doing what they believe is the right thing to do to keep the peace and stay together.

But it comes at a cost.

You have a huge fight.

A fight over nothing.

A fight where you’re screaming at one another, threatening to leave, and saying every single nasty comment you wanted to say for AGES but bottled up.

Will your relationship survive?

It can be really hard to admit you’re angry with your guy.

I can’t tell you how many times I’ve heard clients say:

When I hear that, I think to myself, “Ahh, she hasn’t allowed herself to feel her anger.”

You can’t go through a relationship without getting angry with each other. Anger is a natural human emotion.

But most of us have learned that anger isn’t safe. It’s dangerous. It can hurt other people.

So we get angry, but we don’t want to be the type of person who’s always angry. So we stuff it down, or we divert it toward something more socially acceptable…like sarcasm or sadness.

What’s not okay is using anger as an excuse to attack each other. Just because you’re angry at him doesn’t mean he’s doing something wrong.

Your anger is more about YOU than it is about him.

You see, anger is a message from your body. It’s what’s called a secondary emotion. It’s alerting you to the presence of more complicated emotions, like shame or helplessness or fear.

Often, what you’re angry about is not even the real problem. You think you’re angry because he’s lazy. He sat on the sofa all evening and didn’t bother to lift a finger to help you with the mountain of work you had to do.

But maybe the real problem is that you wanted to ask him for help but didn’t feel you could. You felt overwhelmed and afraid you wouldn’t get everything done. And instead of facing those uncomfortable feelings, you shouted at him. It was easier.

Gary Zukav describes anger as “an attempt, often successful, to push away what is most longed for—companionship and understanding.”

He believes that anger is a Band-Aid over the top of pain. As long as you feel angry, you don’t have to face your pain.

So pay attention to your anger. Let yourself feel it. Don’t be afraid of it.

Instead of talking to your GUY about what’s making you angry, talk to your anger first.

Ask it what it’s afraid of.

If you can find out what your anger is telling you, then it’s much easier to tell your partner what you need.

Which do you think will make your anger go away faster?