Home > Commitment > Getting What You Want From Your Guy

Getting What You Want From Your Guy 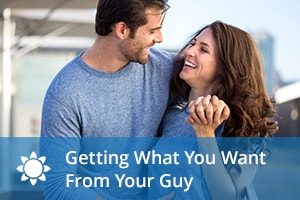 Tell me if you’ve heard this one.

There’s an old metaphor people sometimes use to describe relationships. They say relationships are like a checking account.

You make deposits when you do something nice or meaningful for your man. When you need something from him, that’s like making a withdrawal. It’s a simple analogy that mostly works.

Mostly. But here’s the problem with it.

People don’t really keep tabs on how often you do something nice for them. In fact, people are more likely to remember negative encounters than positive ones!

That’s not great news if you’re hoping a sweet gesture today will win you a favor tomorrow.

But fear not. There’s another way to get your guy to do what you want.

In a classic study dating all the way back to the 1970’s, researchers uncovered a strategy that consistently motivates others to fulfill YOUR requests.

No, it’s not magic. It’s not manipulation, either. It’s something far more simple. Plus, you can put this strategy to work in your relationship today.

If you want something from your partner, give him a REASON to act.

I know. It sounds insanely obvious. In fact, you’ve probably tried variations of this approach, yourself. But there are a couple of secrets to making it work every time.

Negative motivation is also known as “pain avoidance.” It’s exactly what it sounds like.

For example, let’s say you want your man to make a big deal of an anniversary. So you warn him ahead of time that anniversaries really matter to you. You tell him about the epic fight you had with a previous boyfriend who wasn’t celebratory enough. You even imply that a lack-luster evening would prompt you to reconsider the entire relationship.

Have you motivated him into action? Probably. But all his motivation is tied to the desire to avoid the pain of incurring your wrath!

There are times when negative motivation is appropriate. The reason more people don’t fly down the highway at 120 miles per hour is because they don’t want the massive fine that comes with a speeding ticket.

What’s In It For Him?

Instead, do the exact opposite. (Betcha didn’t see that coming.)

Don’t tell him how miserable you’ll make his life if he fails. Tell him how wonderful things will be FOR HIM if he succeeds.

Let’s go back to that anniversary example. Skip the implied threats. Instead, try saying something like, “You know, I really like it when you make a big deal of special days. In fact, I like it so much I can pretty much guarantee a very special night for you.”

Now you’ve got his attention!

In other situations, you might offer some kind of exchange. If he goes antiquing with you, you’ll go to the game with him next week.

Even simple praise goes a long way. Tell him how amazing he is for going to a boring office party with you before the party. That’ll put him in a good mood and make the whole ordeal more pleasant.

In each example, you’re giving him positive motivation to meet your expectations and fulfill your desires.

The trick to getting your guy to do what you want isn’t really a trick at all. It’s just solid communication combined with a focus on the positive.

Figure out how doing what YOU want benefits HIM. Then call his attention to it.

Master this technique and you’ll BOTH be happier!