Home > Commitment > Get Him to Invest in Your Relationship

Get Him to Invest in Your Relationship 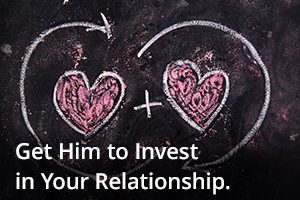 Everyone knows women who’ve struggled to get a marriage proposal out of a long-term relationship. Everyone knows men committed to the bachelor lifestyle.

At a glance, that distinction comes across as absolutely, indisputably true.

But generalizations can be misleading.

They’re particularly misleading when they suggest there’s nothing we can do.

If he won’t commit, why bother trying to make him? If she’s only interested in a wedding ring, why lead her on?

The truth is this:

About 90% of the population ends up getting married at least once in their lives.[1]

That’s most of us. Clearly, we figure out how to balance our competing desires for freedom and commitment.

The investment model of relationships explains how.

According to this model, four factors predict whether a relationship will last:

A relationship where both parties are satisfied, have a significant investment in the relationship, and don’t have any real romantic rivals is likely to show high degrees of commitment.

It’s their interdependence that makes a couple strong, not the depth of their feelings for one another.

Which explains why a man can love you deeply but still hold back from making a commitment. It’s because at least one of these four factors aren’t where it should be.

The beauty of this model is that it doesn’t depend on gender distinctions to explain why some relationships crumble and others go the distance.

For example, a man who has a number of beautiful women on his arm is less likely to commit because of Factor #3: Alternatives.

The more quality alternatives he perceives he has—even if it’s just the imaginary alternatives of an online dating app like Tinder—the less committed he’ll feel.

This works for women, too.

Women who have a number of men vying for their interest can afford to be choosier. They’re unlikely to commit until they’re sure they have identified the best possible option.

Factor #2, Investment, explains why men often fight to stick together just as hard as women do.

When a man has invested a lot in a relationship, he’s more likely to work at staying together even when things get tough.

A married man with a house and kids will find it harder to separate than a co-habitating man who’s never merged his finances with his girlfriend.

Divorcing couples are more likely to be childless than to have children together, [2] suggesting that children are one of the biggest investments a man can make in a relationship.

On the other hand, women who don’t have a lot invested in a relationship are more likely to leave if things aren’t going well. A breakup may break her heart, but it won’t break the bank.

These days, women are more likely to initiate divorce than men. The reason—at least, according to The Washington Post—is because of the third factor:

Life is too short to feel as if your soul is being suffocated, explained one woman.[3]

As information on healthy relationships has become widely available, more and more women are realizing they don’t have to put up with dysfunctional relationships. They have the right to be happy. If they’re not as happy in their relationship as they were when they were single, they’d rather be single.

How to Use This for Enhanced Commitment

The investment model of relationships gives us a number of good ideas when it comes to increasing commitment in our own relationships.

Follow John Gottman’s rule of 5 positive exchanges for every negative one. Give him plenty of compliments and affection. Let him know how satisfied you are in the relationship, too.

Make future plans, such as buying tickets for a concert that takes place in a few months’ time. Ask him to do something little for you, like helping you with an odd job around the house. It can be hard to receive a man’s help, but it’s to your advantage. The more he does for you, paradoxically, the more he’ll value your relationship.

You can’t help how many available women he comes across in the course of his day, but you can make sure that none of them measures up to you. A real live woman in his arms is better than a bevy of Photo Shopped beauties online.

It’s the formula for commitment for all of us.