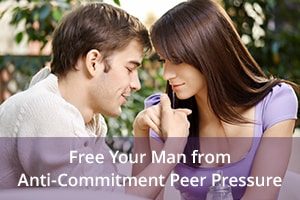 Lewis Howes had it all.

A bestselling book for which he was about to go on tour.

An athletic career that had catapulted him all the way to the pros.

So, the first thing he did?

Break up with his long-term girlfriend.

Why tie himself down? A man like him didn’t have to settle. He had options.

When he could cut loose and enjoy the lifestyle he deserved as an attractive, globe-trotting bachelor?

It didn’t take long before he regretted his decision.

On tour, staying in one nondescript hotel room after another, he realized he was alone.

“I was asking myself about the point of it all,” he writes. “I had no one to share it with. I had no intimacy or deep connection with anyone else.”[1]

You’ve probably heard versions of this story before.

A normal guy, with a wonderful woman who loves him, achieves amazing career success … then announces his divorce.

Why do men throw away the best thing that ever happened to them?

What do they think they’re hoping to gain by choosing casual flings over a committed relationship?

Some say it’s just the way men are. They’ve evolved to spread their genes.

But the truth is that most men want to get married and have children someday. The wedding industry is alive and well, driven by vast numbers of men getting down on one knee. These men chose love—and they couldn’t be happier.

Others say that it’s the woman’s fault. She’s not doing or saying the “right things” to make him commit.

Howes wants us to consider a different perspective.

He thinks that what keeps men from committing is peer pressure.

Not just any peer pressure, either.

But the worst kind of all…

The pressure from society, culture, friends and family to “be a man.”

In his incredibly personal book, The Mask of Masculinity, Howes unravels what he learned about being a man—and suggests ways you can help the man in your life experience a break through.

This is what it takes to “be a man,” according to Howe’s analysis of social pressure on us guys.

A man can’t show emotion. He must be financially successful, powerful, and into sports. He must know all the answers and be quick with a quip.

But most of all…

He must be having lots of sex.

“The number of women you’ve slept with determines your worth,” Howes explains.[2]

In this toxic masculinity, sexuality and commitment are mutually exclusive. Whereas a woman’s girlfriends celebrate her relationship milestones with her, men rib each other about giving up their freedom for a woman.

This is a belief system, not a fundamental truth about ALL men.

Not all men buy into it.

These men have learned—through the example of fathers, coaches and mentors—that real men don’t look anything like the skewed masculine ideal they’ve been fed.

They’ve learned that making it work with one woman is an even more exciting challenge than sleeping with many.

Howes eventually realized that having a relationship wasn’t preventing him from being the man he wanted to be.

Rather, his adherence to unwritten rules of masculinity was holding him back.

By the end of the tour, he’d reconnected with his ex.

They got back together, but it wasn’t easy.

He had to unlearn the idea that a perfect girlfriend would always give him what he wanted.

He says, “It seems like such an embarrassing discovery to learn that a woman in your life is a fully realized person, too, and is not just there to serve you per the role of ‘girlfriend.’”[3]

You can help the man in your life take this journey, too.

You do it by praising his vision and values, instead of his virility and might.

You admire his courage when he steps away from the crowd.

You help him embrace the parts of himself that don’t fit the mold. His tenderness. His confusion. His helplessness.

You never use his manhood as a source of criticism (“You’re such a MAN!”).

You see him as a whole human being, rather than “just another man.”

In doing so, you make it safe for men to be real. To be who they really are, rather than what the code of masculinity demands.