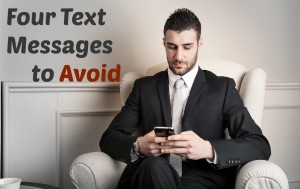 Text messages are great. They allow for quick communication practically anywhere. When you’re dating someone, they have the very real potential to help your relationship grow.

But they can also hinder it.

A lot of people rely on text messages to get something more than information. What do they want? Attention and affirmation. They want to know there’s still a warm connection.

My advice is simple. Don’t use text messages as an easy way of asking for attention over and over again. Instead, send him messages that have value.

Unfortunately, many of us are in the habit of sending valueless text messages. I’ll give you a few examples. I’m not saying you should never send these kinds of messages. Just make sure you don’t overuse them.

This can easily come across as an attempt to get him to reply with, “I miss you, too.” Frequent messages that sound like you’re fishing for a specific response can make a guy feel trapped. Don’t send this one too often.

The problem with these messages is that there’s just no substance to them. Best case scenario, you’re saying he’s on your mind, but there’s nothing personal about it. At worst, they’re thinly veiled requests for attention and nothing more.

There’s nothing wrong with wishing him a good day, but it’s much better to be specific. Instead, say something like, “I’d love to hear how your presentation goes!”

The hope here is that he’ll entertain you. That’s fine if he’s stuck in the waiting room at the dentist’s office, but not if he’s busy with work or friends. Think about where he is and who he’s with before hitting send.

All of your communication should enrich his life in some way, including text messages. (Ok, maybe that’s a bit perfectionistic, but just aim for it as an ideal).

Instead of relying too much on messages like the ones above, make your messages meaningful. You might share a funny story to make him chuckle. Or tell him something interesting or intellectually stimulating. Or deal with something practical, like an invitation to an event you think he’ll enjoy. You can even use a text message to give him the opportunity to vent when you know he’s having a rough day.

The temptation is to focus on the very natural desire to hold his attention. That’s totally okay and totally normal.

But I want to encourage you to win his attention by sharing something meaningful with him. That will build your relationship in positive ways and ensure that his face lights up each and every time he gets a new message from you.