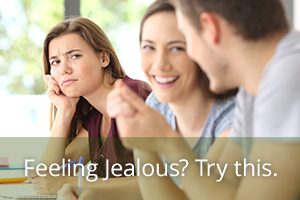 Josh was spending a lot of time at work.

Marian didn’t mind. Not at first.

She was proud of her fiancé. He told her the work he was putting in now would pay off in the form of a better life for both of them.

But then she attended Josh’s office Christmas party … and met Sarah.

Sarah was in her 20s, with long blond dreadlocks and a silver nose ring. She was vivacious, flirtatious, and seemed to have several men from the office wrapped around her little finger. Including Josh.

Marian came home that night furious. She wouldn’t talk to Josh for days.

He told her their relationship was entirely professional. That’s just how Sarah was. It’s not like they were ever alone together.

But Marian didn’t believe him.

“I trust Josh,” she told me, “but I don’t trust that woman. You should see what she wears! I mean, I’m all for casual office attire, but those tight t-shirts cross a line.”

“So let me ask you something,” I said. “What emotion are you feeling right now?”

“What would you say if I suggested you might be feeling jealous?”

Marian flinched. “Absolutely not. That’s annoying. Jealous of some … teenager?”

If there’s one emotion that’s got a majorly bad rap these days, it’s jealousy.

No one wants to admit to being jealous.

Prior to the 1970s, jealousy was considered a normal part of love. If you loved someone, of course you got jealous. You didn’t have to be embarrassed about it.

You can see some remnants of this way of thinking in dating advice that urges you to make him jealous if you want him to fight for you. Show him he’s got competition. If he’s not going to do the work, you’ve got other options.

It’s one thing to make him jealous but quite another to feel that unwanted emotion creeping up in yourself.

Jealousy is painful. Ever heard a friend say, “If he so much as looks at another girl, I’ll kill him”? It’s easier to direct anger at him than to admit you feel threatened.

But Esther Perel has a different perspective.

In her latest bestseller The State of Affairs, Perel suggests that the jealousy provoked by the thought of your man straying can rekindle a lackluster relationship.

That’s because it lights a fire under you. Nothing turns up the heat in a relationship more than the thought of someone else trespassing on your territory.

So here’s my advice to you. Don’t be afraid of jealousy. Use it to your advantage.

Not by sparking jealosy in him—I never recommend flirting with other men to make your guy jealous—but by acknowledging it and honoring it in yourself.

Here are 3 steps to turning those feelings of jealousy from pain into the pleasure of success.

Until the office Christmas party, Marian hadn’t really considered what other women thought about her fiancé. She assumed they knew he was off limits, and that was that.

But that night, she saw Josh through Sarah’s eyes. She saw how attractive he was. She saw how other women might deem him a catch.

When I suggested this to Marian, she felt strangely empowered.

She’d been with Josh for so long that she took him for granted. They were in that stage of their relationship where it was about getting on with their lives, rather than obsessing over each another.

Marian could see how getting attention from someone as young and ditzy as Sarah might feel flattering for Josh.

“Doesn’t it feel good to know that Josh is still coming home to you?” I asked her.

Marian nodded. She was starting to see Sarah and the whole situation differently.

That evening, when Marian got home, she gave Josh a welcome he’d never forget. She didn’t tell me the details, except to say she hadn’t seen such a big smile on his face for ages.

She was feeling good again. The more she thought about what a handsome fiancé she had, and what a miracle it was that he came home every night to her, the more she saw the situation with Sarah as an important reminder rather than a threat.

“I guess it doesn’t hurt to be jealous now and then,” she said.

“As long as you don’t take those feelings out on him,” I reminded her. “Or feel bad about your own natural emotions.”

Let jealousy serve you, but don’t let it be your master. Let it remind you how lucky you are, then let it go or transform it into positive action.