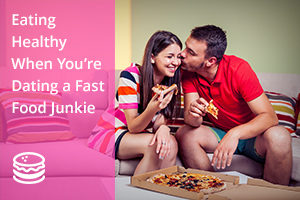 Have you ever tried to stick to a healthy diet while the guy you’re dating is sucking down cheese burgers and pizza? It’s not an easy thing to pull off.

I was talking to a friend about this recently. She’s on a health kick, hitting the gym several times a week and trying to make smart choices at meal times. But her boyfriend keeps ordering fried mozzarella before every meal and finishing off with lavish desserts!

More than once, she’s slipped. Just the other night she had salmon and steam veggies…followed by a nice, big slice of cheese cake and a sugary coffee drink.

Not that there’s anything wrong with splurging every now and then. There’s not! But if you’re trying to be militant and he’s all about cheese and grease, that’s not going to help with your fitness goals.

Plus, it can put a strain on your relationship.

And if you’ve ever tried to change the eating habits of a guy, you already know that approach typically doesn’t work. As the saying goes, the way to a guy’s heart is through his stomach. Taking away the food he loves isn’t going to make him crazy about you!

So how do you balance your own personal goals with his, especially if the two of you are shooting for different things?

After all, couples eat together all the time. It’s not like you can avoid the issue.

But it is possible to spend time with him without ditching your diet. You just have to have a strategy. I have three suggestions.[i]

For starters, his goals are his goals. Your goals are your goals. The two don’t have to be the same.

I know it’s tempting to push him to make healthy choices. After all, you care about him. Why wouldn’t you encourage him to take the best possible care of himself?

But nagging him about the fatty steak and loaded baked potato he just ordered isn’t likely to inspire life changes. It’s more likely to lead to a fight.

Instead, make the decision to make food choices for yourself based on YOUR goals, and let him eat what he wants.

If at all possible, don’t keep a stash of his junk food at your place. Yes, he might like to snack on chips or Twinkies, but if that stuff is in your house it’ll call to you.

I’m not proud of this, but I know firsthand how powerful the siren song of a Twinkie can be. (Seriously, they’re like a party in your mouth.)

The best approach is to make your place a junk food free zone.

If you absolutely have to keep some food on hand for him (or if you live together), isolate the stash. Keep all off-limits food on one shelf in your pantry, all together, and don’t even look at that shelf. That way you won’t wear down your impulse control each time you look in the pantry.

This last tip is just sound dieting advice. Even if you’re committed to celery sticks and kale nearly all week, give yourself some kind of treat every now and then.

If you’re dating a guy who scoffs at the idea of fat-free anything, it might be a really good idea to plan your cheat meal around a time when you’ll be with him. That way you can enjoy time together without any tension or guilt.

You were going to give yourself a break from your diet anyway, right?

When you date someone, you give them a lot of influence over your lifestyle choices. The way they eat can easily rub off on you. 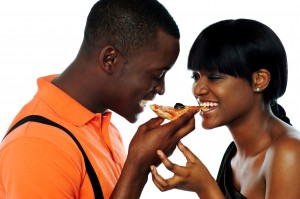 If you’re committed to a healthy diet, be aware of where your food choices and his don’t line up. Then, instead of trying to change him, remove temptation as often as possible, and cheat every once in a while.

The right dieting strategy will help you meet your goals and keep you and your guy happy.