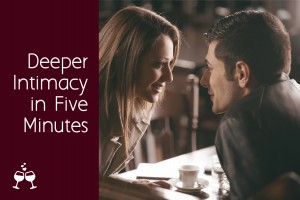 Remember the last time you were talking to someone and felt like they weren’t listening at all?

It happens to me more often than I like. Sometimes I’ll say something totally outlandish just to see if they react. It’s surprising how often they just nod.

The sad reality is that we live in a culture that isn’t very listening-oriented. It’s sad because everyone values being listened to. Few things matter to us as much as feeling understood. That’s when our connection to another really deepens.

But, there’s an upside. You can use that truth to boost your relationship’s intimacy in less than five minutes. Here’s how.

First, when you talk to the man you’re interested in, read between the lines.

Second, reflect on what he’s not saying (but clearly feeling).

Let’s say he greets you with a heavy sigh, hunched shoulders, and a pained look on his face. The first words out of his mouth are, “Another great day at the office.” What’s he really saying?

He’s not saying he had a good day; that’s for sure. When we talk to each other, the words are only a fraction of the message. Yes, you should pay attention to what he says, but you should pay even more attention to his body language. What does the expression on his face tell you? Is his overall posture relaxed or tense? Does his tone match his words?

Those non-verbal clues will give you valuable insight into what he’s feeling beyond the surface. They’re like a window to his deeper emotional levels. Take stock of it all.

Then, reflect on what you’ve noticed.

Sticking with the example above, you might say something like, “Work wasn’t much fun today, was it?” Paraphrase his emotions, not just the raw content of what he said,

These vague questions give him the impression that you already understand something he’s not saying. That encourages him to open up to you.

It’s a subtle way of saying you’ve noticed his current life experience, and you’re willing to listen if he’d like to share more.

And this works even when he’s not down in the dumps. If he’s in a good mood, you could say something like, “Enjoying life is important to you, isn’t it?” By speaking directly to what he seems to be feeling, you open up lines of conversation that instantly feel more intimate.

If you’re genuinely interested in how he feels, that shows, too. In fact, even if you misjudge his mood he’ll still be more likely to open up to you because he’ll see that you truly care.

Moving to a more intimate level of conversation is all about connecting. Read between the lines to get a sense of his emotional state, and then ask speculative questions that are just vague enough to allow for open conversation. In less than five minutes, this method will allow you to tap into a deeper level of conversational intimacy, even with someone you’ve just met.