Become the First Woman to Truly Understand His Needs 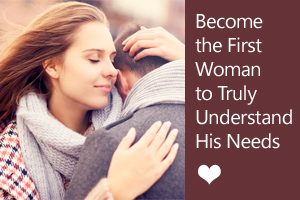 He may act like he has it together, but he doesn’t know what he’d do without you.

You supply his unspoken needs. Because you do what you do, he doesn’t have to admit he could use some support. He can maintain the illusion of being self-sufficient.

You are there for him. And he is grateful.

Men don’t always talk about their needs as freely as women do.

For many men, admitting they even have needs is difficult. They’ve been raised to act tough and need no one. Being needy is tantamount to being a wuss.

That’s why relationships are so important for men: they give men what they can’t get anywhere else.

Men are healthier in relationships, both physically and emotionally. Once married, men engage in less reckless behaviors, take better care of themselves, and even earn more money.

Here are just some of the things you do for him, perhaps without fully realizing it:

But there’s one little hiccup in this rosy scenario…

Does he ever tell you exactly what his needs are?

Or do you find yourself guessing most of the time?

Perhaps you’ve had the experience of asking your guy if there’s anything you can do for him. He shakes his head. “Nope, nothing. I’m fine.”

It’s like pulling teeth to get him to talk about what he needs from you.

So here’s a different way of going about it.

Ask him, “How can I make that EVEN better for you?”

Insert that question into a discussion about communication, finances, housework, or any other area of your life together where you’d like him to open up.

Too often, explaining his needs is a no-win situation for a man.

It implies that you’re not doing enough as his partner, or you’re doing something wrong. He doesn’t want to hurt you. He doesn’t want to tell the truth if it upsets you or affects how you feel about him. He’d rather keep his mouth shut and put up with a less-than-satisfactory situation.

Is he right to think that way?

We’re all sensitive to criticism. We all do as much as we can in our relationships. It’s not nice to face the thought that there are still areas that could be improved.

That’s why it’s easier to look at how you can make your relationship better. That implies things are already good. No one is criticizing anyone.

He might not know how things could be better right away. It’s okay if he needs time to think about it.

If and when he comes up with some ideas, resist the urge to judge his response, analyze it, or dig deeper into his motivations. Simply tell him, “Great, I can do that. Thanks for telling me.” If you can’t do it, explain why and offer an alternative.

Don’t make it into more than it is. Even if what he says stings a little, try not to take it personally. He’s not telling you he feels differently about you.

He’s just suggesting changes. This is about being better as a couple. It’s not about your worth as a person.

When you show him…

(1) you want to hear his suggestions and

(2) you’re not going to judge him for being honest,

you may find that he starts opening up to you a lot more.

It’s difficult being honest, especially if there’s the possibility of hurt feelings. But if you can face that discomfort and move through it, you’ll find your relationship growing by leaps and bounds.

You could very well become the first woman who’s ever truly understood his needs.

And, hopefully, when he sees how much that one little question improves your relationship, he’ll start asking you the same thing.