Attract Your Perfect Mate Using Nothing More than Your Expectations 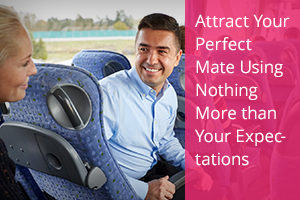 Everyone says, “I’ll believe it when I see it.”

But what if that’s backwards?

What if you can’t see something until you believe it’s possible?

Let me give you an example.

Every day, men smile at women they’d secretly love to get to know better. Women smile back, thinking, he’s cute. But, because neither person believes it’s possible that the other person could feel the same way, they go their separate ways. They miss making that connection, because they don’t believe it’s possible.

Do you do that?

Take a moment to think about all the single men you cross paths with who are roughly in your age range. How many of those men would be interested in getting to know you better?

Chances are good it’s more than you think.

It’s so easy to be dismissive. A man lingers to talk to you, and you don’t think anything about it. He’s nice, you think, and you go about the rest of your day. Meanwhile, he’s cursing himself. He fumbled it, he didn’t spark any chemistry, he didn’t take the conversation further.

This can happen over and over again. Meanwhile, you’re thinking, “No one ever asks me out. I guess I’m just not that attractive.”

These women have a strong belief system that goes like this:

If you’re female, of course men would be attracted to you! Men are always attracted to women. It’s a law of nature.

Women who struggle to find a date tend to believe something different:

Men are only attracted to extremely attractive women. They ignore ordinary women. If you’re ordinary, men will ignore you.

If you look for evidence of men making a beeline towards extremely attractive women and ignoring the rest, you’ll find it.

If you look for evidence of men chatting up all kinds of women, even those who aren’t conventionally attractive, you’ll find that, too.

We all tend to pick up on things that confirm what we already believe. In fact, our beliefs create our experiences to a much greater extent than we realize.


To show you how, there’s another fun exercise you can do.

If you bring something to your conscious awareness, you’ll start to see it in your environment around you. That doesn’t mean you’ve magically materialized those Volkswagen Beetles. They were probably there all the time. It’s just that you didn’t notice them before.

Is it possible, then, that you’re not seeing the romantic possibilities around you because you don’t believe they’re there?

Try this experiment. Tomorrow morning, wake up with the intention of spotting the guy who’s interested in getting to know you better. Believe he’s out there. As destiny would have it, he’s going to cross paths with you today. Who might he be?

The next day, do it again. This time, see if you can spot a different guy who’s also interested in you.

Do that every day for 7 days.

Some days, you might not spot anyone. And that’s okay. What this exercise is doing is helping you become more aware of the romantic possibilities in your environment. It’s forcing you to look in a way that you may not have been looking before.

You may be thinking, “But what if I’m just imagining it? What if he’s not really interested?”

You’re right: you may just be imagining it. But it doesn’t matter. Here’s why.

When you have the idea in your head that a certain guy may be interested in you, you act differently towards him. Maybe you smile at him more, or you give him more of a chance to talk to you. He picks up on those subtle signals. “Oh,” he thinks. “This is a woman who has the time of day for me. She’s really nice.” Your behavior can spark his interest.

Visualization works in a similar way. The more clearly you can imagine your perfect mate, the greater your chances of recognizing him when he bumps into you. It’s no mystery. You can’t see what you’re not looking for.

So, start looking. Believe he’s out there.

Adopt a new way of thinking: “I’ll see it when I believe it.”