The Apology Hack that Gets Better Results than “I’m sorry” 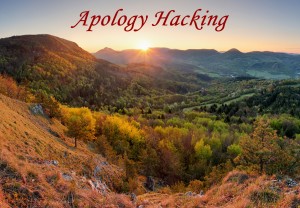 Which of these apologies sounds more powerful coming from your man?

“I’m sorry your feelings got hurt.”

“I’m sorry I hurt your feelings.”

Have you ever gotten an apology that didn’t feel like an apology at all?

It didn’t really make you feel better, did it?

Apologies with qualifiers don’t work. Okay, so they kind of work. At bare minimum, they demonstrate an attempt to mend things. But they also come off sounding insincere. It’s a missed opportunity for healing.

An apology that seems to be focused on letting yourself off the hook just doesn’t have much impact. In contrast, an apology that focuses on acknowledging another person’s pain can be profoundly healing.

Men and women talk about their emotional wounds differently in close relationships. Ask a man why he is frustrated and he is likely to say he was “blown off” or “disrespected.”

In contrast, women tend to talk about “feeling hurt” by a partner’s actions. Sadly, the language we use to express our feelings sets us up for apologies that only go halfway.

Consider this hypothetical: You’re on your way to a party. He’s certain he knows the way, but he ends up getting lost. You’re not overly worried about getting there on time–it’s a party. No one’s going to be on time. So, to lighten the mood, you make a joke about his lack of navigational skills.

He clenches the steering wheel. He’s wondering why you would kick him while he’s down. He feels disrespected.

But you didn’t mean to disrespect him! You were only making a joke. So you say, “I’m sorry you felt disrespected. I was only kidding.”

That sounds like a good apology, right? But there’s a problem. Instead of hearing what you said, he’ll hear something totally different. Something along the lines of, “I didn’t do anything wrong, but I’ll jump through the hoop of an apology if it will help you to feel better. (Even though I really shouldn’t have to. Because I didn’t do anything wrong.)”

Telling him you’re sorry he felt disrespected doesn’t work because it does nothing to address his emotional pain. Instead of validating how he feels, he’s likely to think you’re doing the opposite. In trying to make the distinction that you didn’t mean to hurt him, you run the risk of making things worse.

Wait a minute! Hold on. That makes it sound like you’re to blame!

You’re right. It does. But that’s not the point. The goal is to remove the obstacle that’s holding the two of you apart. If he needs to hear an apology that matches his perspective in order to let go of his emotional pain, isn’t that what really matters?

A lot of women worry the guy will take advantage if they say they’re sorry for something they never intended to do. However, the truth is that rarely happens. Even if he seems angry, underneath his rage he’s really just hurting.

When you address his emotions by offering a no-strings-attached apology, you’re freeing him from that pain. That paves the way for the two of you to reconnect.

What’s more, when things have calmed down, you can always clarify. It’s totally okay to tell him you never meant to disrespect him. He’ll even appreciate hearing it, so long as you’ve already apologized.

The emotional healing has to happen first.

Instead, remember what’s truly important to you. The man you care about is hurting. It’s not about whether or not you meant to hurt him. At that moment, it’s all about doing what you can to help him move past his pain.

Embrace the power of a simple, no-strings-attached apology. It can spare you hours of unnecessary tension.