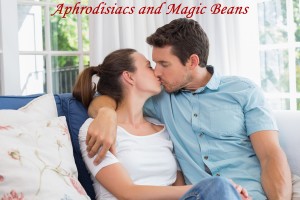 Each year around Valentine’s Day, food and recipe magazines feature articles about aphrodisiacs. I’m sure you’ve seen them. The idea is that snacking on certain foods will put couples in the mood for something more intimate.

To be fair, the things we eat do produce chemical reactions in our bodies. In that sense, the notion isn’t that far-fetched.

The list of foods that get labeled as aphrodisiacs includes chilies, avocados, honey, almonds, pomegranates and even oysters. The most common explanation for their alleged libido-boosting power is a combination of antioxidants and vitamins your body relies on for sexual function.

So, what’s the problem? With one notable exception, there just isn’t much evidence that any of them work.

In fact, sometimes the origin of a food’s sex-drive-inducing potential shows just how unlikely the myths are. Take avocados, for example. The Aztecs dubbed the avocado “the testicle fruit” because of the way they hang from tree branches in pairs. That’s not exactly hardcore science.

But there’s more. Even if antioxidants and vitamins can create an effect on sexual desire, your body doesn’t absorb that stuff and put it immediately to work. While there is evidence that a man will be friskier the next day if he eats a meal high in saturated fats the night before, it’s unlikely that any snack will put him in the mood in the next few hours.

Except one. A very special kind of “magic bean.”

This is the one alleged aphrodisiac I put stock in. And there’s a good chance it’s a food you already enjoy.

Its chocolate, derived from the cocoa bean.

What makes chocolate so special? Chocolate contains two enzymes, anandamide and phenylethylamine. Unlike vitamins or antioxidants, these enzymes affect your mood right away. They tend to encourage a relaxed, happy state of mind for a short period of time.

I can personally vouch for the good mood effect of chocolate. Sure, it’s tasty, but there’s more to it than that. I often notice myself humming with relaxed energy about an hour after snacking on dark chocolate.

And that’s the key. To really feel the effects, you have to go with chocolate that contains a significant percentage of cocoa. A dark chocolate. I like chocolate that has at least 80% cocoa content.

Adding to the good mood effect, dark chocolate also naturally contains caffeine. Unlike alcohol, a subtle amount of caffeine will leave you and your partner energized for action rather than sleepy.

The effect of dark chocolate is a sort of relaxed but alert mental state. So, is dark chocolate a scientifically proven aphrodisiac? Is cocoa really a magic bean?

No. If you’re looking for a direct link to libido, I can’t point you to a study that proves chocolate will boost your sex drive. I honestly don’t know of any food that will do that.

But even if the claims that chocolate has aphrodisiac powers are all a myth, you still win. It is proven that it can put you and your partner in a better mood. There’s plenty of research to back that up.

So my advice is to avoid oysters and start cultivating a taste for dark chocolate. It’s easy to include in a romantic night, either as desert after a meal or as a little treat at some point during the evening. And unlike oysters, most people already like chocolate.

Give it a try. The worst that can happen is the two of you will end up feeling relaxed and happy, and that can easily lead to some intimate fun!