A Tale of Two Relationships 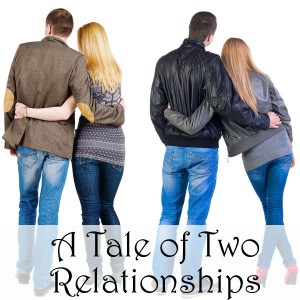 I recently heard a terrible story from the lips of a woman who endured a tragedy of the sort that changes your life forever.  The root cause of her suffering seemed to stem from the repeated decision to forgive a man too many times.  But we will come back to that story in just a minute.  This is a tale of two relationships, and I want to start with the other one.

Her name is Janice (or at least that’s what we’ll call her to preserve her privacy).  Janice is a woman I consulted with regarding relationship issues of a minor sort.  When I use the term, “minor sort” I do not mean to dismiss the emotional pain she was feeling.

I’ll put it this way: Janice was too caught up in her boyfriend’s flaws to appreciate the fantastic man he is, and the wonderful relationship she should have been enjoying with him.

There are many things that can contribute to our unhappiness.  It is my belief that one of the most common sources of unnecessary loss of happiness comes down to the mistake of wanting to be right, even if it costs us our happiness.

It is normal to crave repentance from the person that has wronged us.  You just want them to admit they were wrong and tell you they are sorry!  Is that really so much to ask?!

As you know, the problem is that people often genuinely disagree about who is in the wrong.  There are times when small arguments or missteps that hurt someone’s feelings simply cannot be resolved by everybody admitting to the truth.

That’s because sometimes the truth is that people saw the situation differently. They just don’t agree on whose fault it was that a pleasant interaction erupted into a four-hour argument.

Janice is a wonderful woman, and I like her a lot.  But Janice spends a lot more time feeling unhappy about relationship issues than is necessary.  She is one of those people that failed to learn this important life lesson: it is better to be happy than right.

On the other hand, forgiveness can be taken too far.  The woman I spoke of earlier broke my heart as she relayed the sad experiences that unfolded several years before I met her.  I have changed some of the details of her story to avoid personally identifying information, but here’s the gist of what happened.

Leah was with a man who physically abused her.  Looking back now, she said she believes she stayed with him partly because she loved him and partly because she did not realize how abnormal the situation was.  In her words, “I was so young and I just thought that was normal.”

On top of that, he was the father of her two young children, one just a toddler when the terrible events unfolded.

Getting by on sales commissions alone was hard enough, but when news stories began playing on local television stations regarding the death of her toddler, her employers showed her the door.  Shortly after that she was arrested, allegedly for contributing to the abuse of a child.

The father’s anger problems apparently reached beyond his interactions with Leah.  When Leah was not even home, a fit of rage led to the death of their young son.  After a lengthy trial, the father was imprisoned, and so was Leah.

Why was Leah imprisoned you ask?  Because it turns out she had filed several police reports regarding her husband’s domestic abuse toward her.  Yet she had stayed with the man, and the courts felt this was proof that she was participating in endangering her child by not leaving a man known to be physically abusive with anger management problems.

In other words, she forgave too much.  The court’s ruling made clear the belief that she should have taken her children and abandoned that man in search of safety for her children.  Because she didn’t, she lost her job, her son, custody of her daughter, and her freedom for the time she spent imprisoned.

I share these two tales to sharpen your perception.  I want you to clearly see the path that leads to the greatest happiness.  Stories help us to learn of the perils and pitfalls others have encountered and avoid those same pitfalls.

Happiness will be found when you can clearly see the path of balance.  Don’t give up your happiness in pursuit of getting your man to admit he is wrong.  On the other hand, if you find yourself in a toxic relationship, take decisive and immediate action to extricate yourself from that relationship.

What do you think?  Did the courts go too far this time in pursuit of justice for the child?   Should the mother have been sentenced for endangering a child by staying with a violent man?  Share your comments below so others can benefit from your perspective.