6 Dating Red Flags (And How to Fix Them) 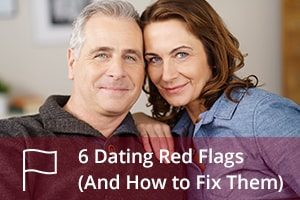 Do you remember that time you were dating a guy and everything was just perfect?

Of course you don’t. That kind of relationship doesn’t exist. Relationships involve people, and none of us are perfect!

And yet, I talk to a lot of women who think romantic perfection is out there. They’re on the prowl for it, serious about finding a guy who lines up completely with their dream, their wish list.

That creates a problem.

As human beings, we tend to see what we hope to see. Think about the classic example of a good girl dating a world-class jerk.

He doesn’t listen to her. When he’s around her, he talks down to her and tells her what to do. If she doesn’t appease him, he pitches a fit. He won’t let her maintain connection with her friends, and even when she’s happy there’s a trace of sadness.

But she defends him. She says things like, “He’s really sweet when it’s just us. Really. I see this whole other side of him.”

That’s an extreme example, but it illustrates a mistake a lot of us make. In the pursuit of perfection, we overlook glaring red flags. Instead of dealing with the flaws in our relationships, we make excuses.

I encourage you to go in a different direction. Look for the shortcomings in your dating relationship so you can address them and reach higher levels of intimacy.

To get you started, here are 6 common red flags and what you can do to move your relationship past them.

Red Flag #1: You do all the heavy lifting.

You solve all the problems. You resolve every fight. When things get messy, he rages or pouts, and you’re the one who calmly steers the two of you back to a more reasonable place.

How to fix it: Stop cleaning up his messes. You’d be surprised how many guys will step up and apologize when they realize no one else is going to make things okay for them.

Red Flag #2: He pushes your boundaries.

Maybe he twists your arm to talk about things before you’re comfortable. Or he demands you decide while you’re still weighing your options. This might even apply to intimate situations.

Whatever’s going on, he pushes you.

How to fix it: Get very clear with him about where the line falls. Help him recognize that your boundaries are real by enforcing them.

He just won’t open up and let you in. You’ve tried everything you can think of to get him to share. You’re open about how you feel, and you ask about how he feels. But you rarely get a response deeper than, “I’m fine.”

How to fix it: Give him opportunities to share . . . and space. Don’t push him too hard, but make sure he knows you’re open to listening.

What if things are moving along a little too fast? Like if he starts asking about baby names while you’re still counting your relationship’s age in weeks?

That’s a sign of desperation and insecurity. Basically, he’s letting you know he’s scared without saying it. If you like him but aren’t ready to elope on your third date, you need to address that.

How to fix it: Tell him you like him, but you need time to let the relationship develop. It’s as simple as that.

Red Flag #5: He tells jokes at your expense. A lot.

Practically everyone wants to date a guy with a good sense of humor. But if you end up as the butt of every joke, that gets old. Fast.

A lot of women just tolerate it. Some even try to laugh it off to prove they can hang with being a punch line. But constant teasing like that destroys intimacy.

How to fix it: Tell him you don’t like it. Clearly. Plainly. If he says you’re just being sensitive, hold your ground. You deserve to feel respected.

Fights are never fun. Voices get raised and things get tense. That’s normal. But name-calling, threatening to end the relationship, or manipulating what you say is NOT okay.

Whatever you do, don’t stoop to the same level. Two people fighting dirty creates an ugly mess.

How to fix it: When things heat up (or he crosses a line), end the conversation until you’re both calm. If possible, put some physical space between the two of you. Just be sure to re-engage later and come to a productive resolution.

. . . red flags don’t flatter a relationship. They hold it back, and that’s the opposite of what you want.

If your relationship has some red flags, don’t freak out. Just acknowledge them and get proactive.

Remember, literally every relationship has flaws. The thing that makes romance amazing is dealing with those flaws and overcoming them as a couple. That will create intimacy like you’ve never experienced before.