3 Ways to Invite Love to Chase You 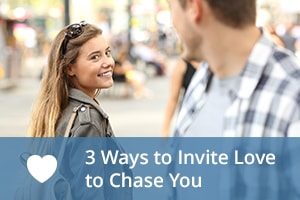 There are two kinds of singles:

Those who wait for Prince Charming to land in their laps…

And those who jump on a white stallion and gallop off to find him.

Because you’re reading this right now, you might very well fit into that second category!

We’re raised to believe that you can’t get what you want until you go after it. You should set a goal and take concrete action steps in the direction of your dreams.

But love is a funny thing. You can’t “achieve love” in the same way as you can achieve other goals.

Love is slippery. We think we’ll find it one place, then it’s not there. It often pops up in the most unlikely of places at the most inconvenient times.

No wonder love is so frustrating. We’re used to being in control of every aspect of our lives. It feels like we should be able to make love happen by sheer willpower. But love continues to elude us, like a wild animal that doesn’t want to be trapped.

But rather as a mystery to respect and appreciate.

Accept that love is a much bigger force than you could ever understand or hope to control, and you may just find it appears when you least expect it.

The 21st century is not an age of mysteries. We believe in the power of science to explain most things. We trust in reason and causality.

But romance often seems unpredictable, as evidenced by stories like these:

Once upon a time, a woman went to a conference and saw a man staring at her across a room. He wouldn’t have even been there had his friends not dragged him out. They met, talked until dawn, and fell in love. Today they’re happily married with two children.

Once upon a time, a woman joined a friend at a baseball game. Baseball wasn’t even her thing. She didn’t know why she’d agreed to go that night, but she’s so glad she did. She met her future husband at the game. They’ve been married 12 years and counting.

So many love stories involve unlikely events such as these.

Wild, crazy synchronicities. Meeting each other against all odds.

That’s the essence of romance. Love stories captivate us most when they’re unexpected.

So why shouldn’t love come to you in the same way?

Why shouldn’t love land in your lap when you least expect it?

Maybe love isn’t something you have to hunt down. Maybe there’s a mysterious force—call it Cupid or St. Valentine or even destiny if you like—working on your behalf, summonsing the perfect conditions for you to meet the one who’s also been waiting for you.

Then try these 3 tips for letting love take the driver’s seat.

When you want something, you want it NOW.

Not next month. Certainly not next year.

But that sense of urgency scares love off.

It’s not great for you, either. You feel anxious when you think you’re not going to achieve your goal by the timeline you’ve set for yourself.

The alternative to urgency is having a bit of faith.

Believe that it will happen, and trust that the timing will be more perfect than anything you could have devised yourself.

Throughout history, humans have always believed that lovers get a helping hand from destiny. If two people are fated to fall in love, then events will conspire on their behalf to push them together.

That idea can sound silly these days.

When you’re single, you can feel very much as if you’re on your own. No one else is going to help you meet Mr. Right. Maybe you don’t even believe in one Mr. Right, but many Mr. Good Enoughs.

But without a belief in mysterious forces at work, you may not have the faith to listen to your gut or say yes to something just because a quiet voice deep inside urges you to.

The more time you spend fighting the things you don’t like about your life—such as the lack of suitable men, or the difficulty of online dating, or the injustice of still being single—the more love stays away.

Love sneaks up to surprise those who are willing to see what is possible, not what is impossible.

So allow for the unexpected. Don’t let your preconceived notions keep you in a box. Love is much bigger than any of us can understand. Give it space to work its magic.

And let me know in the comments about a time when love surprised you.