Quick, tell me 3 things you should be doing right now to find love. 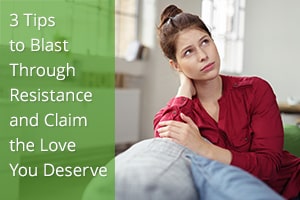 Did a few things spring to mind?

Most of us know what we could or should be doing to live a better life. We have goals that matter to us, a rough idea of how to get there, and a whole lot of resistance.

Resistance is the reason you haven’t done everything you know you could be doing.

It’s that voice inside that does NOT want your life to change.

In just a moment, I’m going to share some tips on overcoming resistance and motivating yourself, but first let’s take a closer look at what resistance is and how it’s holding you back from the life of your dreams.

Resistance is built into our brain architecture.

It’s the voice of our “lizard brain,” an ancient part of our brain concerned with survival.

The lizard brain is highly alert to danger. If it perceives any threat—such as the threat of being rejected—it activates the fear response.

Unfortunately for you, the lizard brain is really good at seeing threats everywhere.

The goal of resistance is to keep you safe and the lizard brain happy. But it confuses “safe” with the status quo. It wants you to keep doing what you’ve always done. Only do things that you know work. Don’t take any chances that could lead to disaster.

You can see why resistance thinks it’s doing you a favor.

If you don’t try anything new, you don’t have to risk anything.

There’s no other time in life when you allow other human beings to make such sweeping judgments on your worth as a person.

At work and at school, you’re judged on your performance. You might not make the grade, but that doesn’t mean you’re not a valuable human being worthy of love and respect.

But when a man on a date turns cold on you, it feels as if he’s implying you’re not worthy of his attention or affection.

To our lizard brain, that’s a red alert.

Humans are tribal beings. We evolved to find safety in groups. Social rejection could mean being kicked out of the tribe and dying when faced with trying to survive alone.

No wonder dating feels so terrifying!

But YOU know that dating won’t kill you. You know that one man’s negative opinion is not the end of the world. You know that putting yourself through fire is often the only way of getting the big prize.

So how can you convince resistance to back off and let you do what you need to do to find love? Here are 3 tips.

When you find yourself saying no to social gatherings or scoffing at the socially-inept singles on Match.com, recognize what’s going on. Resistance is giving you an out.

If you’re too busy, it won’t work anyway, and you never meet anyone good, then you don’t have to try. And not trying is exactly what resistance wants you to do.

Instead of identifying with that voice—that one that tells you not to bother, the guys on that site are all losers, and good guys ignore women like you—call it out. Say to yourself:

“That’s the voice of resistance again, trying to keep me safe. Thanks, resistance. But I’m going to do it anyway.”

None of us want to try something that might fail.

Unfortunately, some estimates say 9 out of 10 first dates go nowhere.

If you expect better odds, you’re going to be so disappointed by the 5th dud date. And you may give up before reaching that 10th date where you meet a really great guy.

That’s why it’s important to see your job as just showing up.

You don’t have to attract every guy. It’s okay if you don’t click with most of the guys you meet. Your job is to make the effort and put in the time.

Most people say that they date in order to find someone. When they don’t find someone after months and months, they get discouraged.

That’s an example of extrinsic motivation, and it’s the very worst way to keep yourself motivated.

The best way to keep yourself in the dating game is to do it because you find some pleasure in dating. See it as an opportunity to meet and connect with people you’d never normally meet otherwise.

That’s intrinsic motivation, and it will keep you going when the going gets tough.

You probably won’t meet Mr. Right on your first try. But if you ignore resistance and keep showing up, it’s inevitable that you’ll find the love you’re looking for.