3 Signs He Wants a Relationship But is Scared to Commit 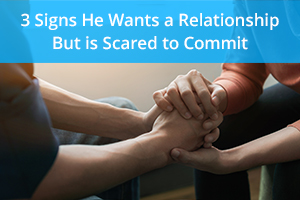 Jade came to me with a clear focus for what she wanted to work on.

“I want to show my boyfriend that he can trust me,” she said. “He had a really toxic relationship with his ex, and now he says he’s scared of getting close to anyone else again. How can I help him get over his fears?”

Jade was the kind of woman any man would feel thankful for. She radiated warmth, generosity, and dependability. She was determined to improve herself and make a wonderful life for the man she’d eventually marry.

“Did anything happen to make him doubt you?” I asked.

“What are you doing right now to help him overcome his fears from the past?”

“Like, everything!” She threw her hands up in frustration. “I give him plenty of space. I don’t push him. I don’t ask much of him. But it’s not working. He says he needs more time.”

It wasn’t the first time I’d heard a story like this.

There are a lot of men who won’t get close to a woman because of their troubled past.

For some, it’s because their parents divorced and they’re afraid the same thing will happen to them. Others won’t get close because a nasty breakup soured them on relationships. Still others are afraid of being rejected or used or letting someone down.

These men are lucky to find partners like Jade who are willing to work with them.

Jade wanted to help her boyfriend get over his fears. She had so much love to give him. But he had to be willing to receive it.

In a moment, I’ll give you 3 questions that will help you decide if his desire for a relationship is greater than his fears.

But first, let’s see if we can get inside his head.

Have you ever really wanted a relationship…

If so, what were you afraid of?

Were you afraid of getting hurt? Of giving away all your power to someone else? Of making a fool out of yourself? Of messing up your one shot with someone you really respected?

If you take relationships seriously, then of course you’re going to be nervous. The more you want anything, the more frightened you’ll feel of taking that first step. Once you start, it feels like there’s no going back.

For some, the dream is so big and attractive that it paralyzes them. It’s easier to wish and hope than actually do something about it. Never trying means you’ll never fail.

Some men fall into that camp. They’d rather fantasize about a relationship than do anything about it. Some women struggle with this too.

Because you’re reading this, I don’t think that describes you. 😉 I think you’re more than willing to do the work to get a great relationship, even if it means you might get rejected or dumped.

But is he willing?

Holding back from you may be his way of protecting himself.

What he doesn’t realize is that he’s protecting himself from love as well as heartbreak.

You need to know whether this man can get over his fears so he can love you the way you deserve … or whether he’ll choose his fears over you.

Find out by asking yourself these 3 questions.

#1. Does he know his future involves a relationship?

A man who isn’t sure whether he wants a relationship may not have the motivation to face his fears. He may use his fear of getting hurt as an excuse to push you away.

If someone genuinely wants a relationship, they won’t let their fear of getting hurt stop them. That’s why it’s so important that he can see himself in a relationship someday, even if he’s not promising it will be with you.

#2. Does he keep his promises?

A man who’s afraid of getting hurt will proceed cautiously. He’ll take longer to make a move. He wants to be sure of each step.

But he also knows that delaying too long increases his risk of losing you. So he’s torn. Jump into a relationship before he’s ready? Or go slow and risk losing you to someone else?

One way to balance those competing needs is only making promises to you that he knows he can keep. He won’t promise you the moon, but he’ll follow through on what he can offer.

#3. Do you talk about boundaries?

People who are afraid of getting hurt can act in ways that seem rude or thoughtless. They’re trying to protect themselves in a clumsy, ham-fisted way.

That’s why boundaries are so important.

If he can let you know what he needs to feel safe, then he won’t have to pull back abruptly. He can set limits, knowing you’ll respect those limits.

You need to be able to set limits with him, too. No more giving you the cold shoulder then begging to have you back. Just because he’s scared doesn’t mean you have to bend over backwards to accommodate him.

That was a lesson Jade needed to learn. Her guy’s fear of intimacy didn’t give him carte blanche to push her away.

Have you ever dated a guy like that? Tell us your story in the comments.