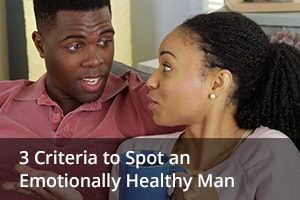 “I want to find me a mature man. A guy who’s responsible, who treats me right, who doesn’t come with a whole lotta baggage I’m supposed to fix for him. Where is he, James? Can you find me this man?”

Taraji was on fire. She leaned forward to emphasize her words. There was nothing I wanted more than to tell her, “Yes! I know exactly where he is, and I’ll introduce you tomorrow.”

I’m not a matchmaker. I don’t break confidentiality to match my clients with each other.

Nevertheless, I could empathize with Taraji completely. So many of the women who come through my office struggle with a dating scene that seems to reward immaturity. Tinder can be pretty shallow. There are a lot of big egos out there.

I knew Taraji was in a pretty good place to meet someone on her level. She was in her 30s, with a stable sense of who she was as a person. She wasn’t just socializing online; she was open to meeting men at work, at the gym, and through friends.

But Taraji, like many women I know, didn’t always vet her potential boyfriends for maturity.

She liked men with a cocky, confident attitude. She appreciated an expert flirt.

If he was suave, good-looking, and keen on her, she gave him a shot.

And that was fine, as long as that’s what she wanted.

But now she was telling me it wasn’t enough. She wanted an emotionally healthy man. Someone who’d sorted out his stuff. Someone who was done with dating and ready for a relationship.

Most women already know there are a few important things you need to check out on that first date. Do you have enough in common? Are your long-term goals compatible? Do you get each other’s sense of humor? Do you have chemistry?

Those are all important. But there’s another factor that often gets forgotten:

Is he emotionally healthy?

You’ll run into a lot of guys who aren’t as mature as you are. They’ve got issues they haven’t addressed. They don’t know how to relate to a woman in a way that strengthens their relationship.

These men may be fun to date. But you may be in a stage of your life where fun isn’t as appealing as it used to be. Maybe you’re looking for something else, like Taraji was.

When your relationship goals shift, the way you select men has to shift, too.

You can’t just pick the same men you’ve always dated. You have to look for different criteria.

I recommend adding these 3 criteria to your list of what you’re looking for in Mr. Right. They’ll help you weed out the immature men and spot a mature man a lot faster.

When he looks in the mirror, does he just see his perfectly-gelled hair? Or does he see what’s going on inside of him?

A self-aware man has the ability to look beneath the surface. He’s aware that he sees things through the filter of his own experiences. He wants to learn about himself so he can be a better man.

You can also get a handle on his degree of self-awareness by listening carefully to his stories about the past.

Does he blame his exes for the way those relationships turned out? Or has he tried to understand the underlying dynamics?

When he talks about his childhood, is it just the facts? Or does he talk about how he was shaped by the way he was raised?

How long does he stick with things?

Does he put down roots, or is he footloose and fancy free?

Has he kept the same friends since childhood?

Has he built his career mindfully, or does he take whatever job suits him?

How long does his average relationship last?

Resilience measures his ability to bounce back.

When bad things happen to him, does he obsess over them? Or does he treat them as learning experiences?

Is he afraid of admitting his mistakes? Or does he own up to the fact that he lets people down sometimes?

Does he shy away from anything uncomfortable? Or is he the sort of man who deals with difficulty the best he can?

I can’t tell you what the perfect score for each of these criteria should be, but the numbers you choose will give you food for thought. You need more than chemistry and compatibility. You need a man who’s emotionally up to the work a good relationship requires.